“I think it is really good for TSTC because they are supporting potentially what could be their future students,” said Darrin Peeples, president of the Harrison County Agri-Business Association. “It gives TSTC a chance to support good kids who are good at what they do and encourage them to be future TSTC students.”

The county’s 57-year-old Farm City Week is a celebration of students’ work creating agriculture projects and raising animals. Students can take part if they are at least 9 years old or in third grade, whichever comes first.

The event generated $359,000 in sales this year, with much of the money going back to the student participants and scholarships, said Wayne Dillon, TSTC’s facilities director and a member of the association’s board of directors.

“The smallest project is about four months,” Dillon said. “Most of them are six months to a year if they raise and train the animals and feed them right and keep them proportional. A lot of these projects the kids start in the ag shop after the school year starts.” 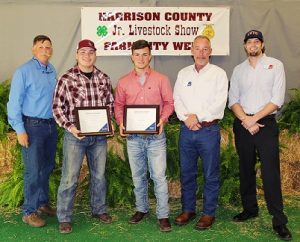