(HARLINGEN) – As a U.S. Navy and Coast Guard veteran Jeromy Jeffries has lived across the United States and overseas, but he now calls the Wind Energy Technology program at Texas State Technical College home.

After more than two decades, the 44-year-old decided it was time to return to college and earn a degree.

“The military was my life. It was my career,” said Jeffries. “I never imagined that I would be a college student, much less be this close to graduating.”

Jeffries expects to earn his certificate and associate degree in Wind Energy Technology in May and currently boasts a perfect 4.0 grade-point average.

“This is a second career for me and I expect it to sustain my family and me until I retire,” he said. “I did a lot of research before enrolling and I’m confident that I’m going to have a great paying, stable job for a long time. There is a lot of growth and opportunity in this industry.” 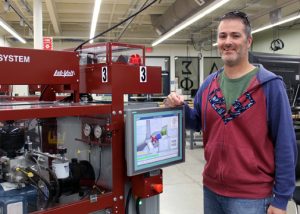 Employment of wind turbine service technicians is projected to grow 96 percent from 2016 to 2026, much faster than the average for all occupations, according the Bureau of Labor Statistics. And with wind electricity expected to continue growing rapidly opportunities are expected to increase.

In an article by Rio Grande Valley Partnership President and Chief Executive Officer Sergio Contreras, Texas is a leader in wind energy power with close to 25,000 Texans working in support of the wind industry.

He states that the impact of these thousands of jobs is also felt in the Rio Grande Valley.

“Opportunities range from the fastest-growing middle-wage position in Texas, wind turbine technician, to the construction workers and suppliers that support continued growth of the state’s wind industry,” said Contreras. “In fact, TSTC in Harlingen Wind Energy Technology program graduates are earning an annual average salary, with a two-year degree, of $53,000, which can go to $90,000.”

Jeffries said knowing the type of opportunities that lay ahead, he made it his goal to work hard and maintain an “A” average and a knowledge that would be impressive to employers.

His determination paid off because he recently accepted an internship position with transition to full-time employment with One Wind Renewable Energy Services in Willacy County as a Wind Turbine Technician starting in April.

“I treat school as a job and I do my very best,” said Jeffries. “And I’m excited for the opportunity I have been presented with and I look forward to beginning my career.”

He credits his success to not only his instructors, who have been a source of knowledge and experience for him, but also the TSTC Veteran Center for helping him in his transition from military to civilian life.

TSTC is a Gold-Level Military Friendly School and the TSTC Veterans Center serves veterans and their dependents as a centralized one-stop shop to get assistance with admission, financial aid, GI Bill and Hazlewood applications, in addition to other internal and external services and referrals to ensure a successful college experience.

“It’s been a difficult transition, but the Veterans Center helping me with all of my documents and processes, and my instructors and classmates who have become family, have made it a bit easier,” he said. “And I know that my two-year degree is going to take me far.”