(RED OAK) – Two employees at Texas State Technical College in North Texas have been honored for their work and skills.

Thomas Betik, a building maintenance supervisor, and Leslie Monk, an Industrial Maintenance instructor, are recipients of the Chancellor’s Excellence Award.

Betik began work at TSTC in 2017 and is the first in his position on campus. Since he is the only building maintenance supervisor there, he deals with most building-related problems that arise. Betik said faculty members also offer their expertise in some situations.

“I was in disbelief,” he said about the award. “To me, to get it in that short period of time was amazing.”

Betik grew up in Ennis and graduated in 1983 from Ennis High School. He graduated in 1987 from TSTC in Waco with an Associate of Applied Science degree in Plant Engineering.

“I come from a farming background and picked up a lot of maintenance and plumbing skills around the farm and made a career out of it,” Betik said.

TSTC in North Texas Provost Marcus Balch called Betik a tireless worker the campus is fortunate to have.

“He is very well respected and liked by the employees,” Balch said.

Monk was hired four years ago as the first instructor for the Industrial Maintenance program at TSTC in North Texas. The Waxahachie resident calls it his favorite job.

“Surprised was an understatement,” he said upon learning about the award. “I read the email three times. It was astonishing and not expected at all.”

Monk said he enjoys teaching because it is a way to share the knowledge he learned from his relatives who were electricians.

“I teach nights with students in the field who want to promote up,” he said. “I get to work with a lot of experienced people.”

Monk grew up in Grand Prairie and has a general education development certificate. He is a 2015 graduate of Cedar Valley College, where he studied interdisciplinary studies.

He joined the United States Navy at 18 and was an electrician in the the U.S. Naval Construction Battalions. While in the military, Monk was deployed to Operation Desert Shield and Operation Desert Storm, as well as to Afghanistan and Iraq.

Balch said Monk is quiet, but a hard worker.

“He has been a trouper for us,” the provost said. “He has helped grow our cohort for Industrial Maintenance at night. He has stepped in to teach Electrical Power and Controls classes in the past.”

Betik and Monk will join 33 other TSTC employees statewide who will be honored at the National Institute for Staff and Organizational Development’s Excellence Awards Dinner in May in Austin. 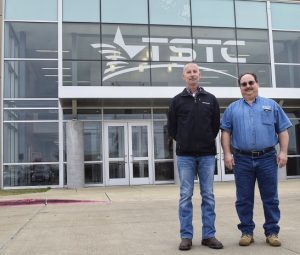