(SWEETWATER) – More than 180 Texas State Technical College students and alumni attended the TSTC Industry Job Fair in Sweetwater on Tuesday, April 2. They had the opportunity to meet representatives from some 50 local, national and international companies.

TSTC provided free transportation to the Sweetwater campus for students coming from the Abilene, Breckenridge and Brownwood campuses. Students talked with representatives from companies looking to fill positions in various fields such as diesel, electrical power and controls, industrial maintenance, nursing, welding, and wind energy.

It was the first time some companies had visited the West Texas campus.

“I was surprised that TSTC had an RN program out here, and now that I know, we fully intend to take advantage of having this local resource,” Tara Camp, community marketing liaison for Cogdell Memorial Hospital, said.

For others, this was an event marked on their calendar every year.

“I go to as many of the job fairs that TSTC does as possible because of the type of training the students get and just the type of personality these students have. Their hands-on experience shows, and they have the willingness to keep learning on the job,” Bret A. Martinets, Human Resources manager at M&S Engineering, said.

“I hope these students just keep their eyes open and learn from every opportunity because it pays off,” McBride said.

“We’ve got 10 positions we need to fill in Odessa alone, so there is a huge need across the state,” Brad Villa, M&C supervisor at Oncor, said.

TSTC in Abilene Electrical Power and Controls student Anthony Neighbors said he was impressed with the company turnout and hopes to find a job that allows him to travel.

“I’m a single dad, so I want something that provides for my son but that also lets me enjoy new places,” Neighbors said.

Neighbors spoke with representatives from Koenig & Bauer and said he felt like he had found the place for him. 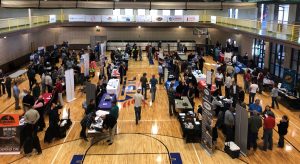 More than 180 students and alumni attended the TSTC Industry Job Fair at TSTC in Sweetwater. More than 50 companies were represented.