(FORT BEND) – Field Development Officer John Kennedy, who has been with Texas State Technical College since the expansion in Fort Bend County in 2014, has recently been named a Chancellor’s Excellence Award recipient.

The Sugar Land native has worked diligently with TSTC donors to raise funds for scholarships, has collaborated with local industry partners and has served as an ambassador throughout the community for TSTC.

“I never expected this,” he said. “There are scores of people who I know deserve this award, so I am humbled.”

Kennedy was nominated by his peers, provost and vice chancellor and chosen among 160 faculty and staff members nominated for his distinguished service and dedication to the college, community and the state. 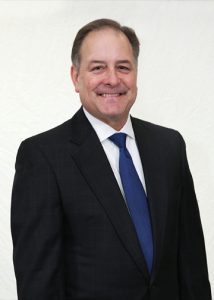 Coming from a long-time career in the hospitality industry and tasked with the mission of expanding TSTC in Fort Bend County, Kennedy realized his favorite part of the job immediately: giving someone the chance at a better life.

“Everyone at TSTC shares a unique opportunity; and that is to give the people in our community an education and a skill that will change their life,” said Kennedy. “There is nothing like seeing our students with their families at commencement. It’s moving and motivating.”

Kennedy said his goal is to continue increasing engagement and interest in TSTC statewide, so that students can continue to have scholarship opportunities.

“Many of our students rely on these scholarships,” he said. “For many, this is a game changer.”

TSTC’s Vice President of Development Pete Rowe has worked with Kennedy for almost five years. In fact, it was Rowe who invited him to join the team.

“As soon as you meet Kennedy you can feel his confidence and see his intelligence. We have a tremendous respect for John,” said Rowe. “I can’t think of anyone more deserving of the Chancellor’s Award than John. His passion for the college and its students is what drives his work and his success. He always puts TSTC and helping others first.”

In addition to serving his community through education, Kennedy also serves the Archdiocese of Galveston-Houston as an ordained deacon at St. Theresa Catholic Church in Sugar Land.

“I enjoy the possibility of helping people and making a difference in their lives,” said Kennedy. “My passion is serving and I carry that over to TSTC and I want to thank those who nominated me and see this. I hope to be able to continue fulfilling expectations now and in the future.”