(FORT BEND COUNTY) – Getting to college and becoming a college graduate was no easy feat for Adam Alvarado, especially without a high school diploma.

But that is all in the past, because the 48-year-old will earn his associate degree in Cyber Security Technology at 6 p.m. on Thursday during TSTC’s Commencement Ceremony at the Stafford Centre.

“I always knew I wanted to become a college graduate. I never thought it would be possible,” said the Rosenberg native. “And it’s still hard for me to believe this is actually happening.”

Alvarado said he grew up in the ‘80s in a predominately white school, where he dealt with a lot of racial issues.

He said this, and the necessity to work, put a damper on his motivation to learn and led him to make poor decisions about his education.

“I’ve had to own my choices. They’ve weighed heavy,” said Alvarado. “I’ve always felt like I’m ‘less than,’ but TSTC has changed that for me. It has built a confidence in me that is hard to explain, but now I feel like I can achieve anything.” 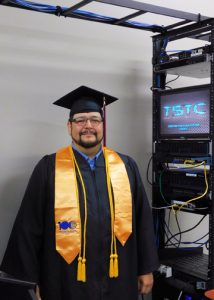 Alvarado worked for Frito-Lay for 15 years as a lead and night supervisor, also handling technical issues at the company’s help desk.

“I enjoyed what I did and learned a lot, sparking my interest in technology,” he said. “But not having a college degree hindered any opportunity I had of growing with the company.”

Alvarado said he prayed a lot about making a career change because before he could enroll at TSTC, he needed his General Education Development (GED) diploma.

Determined to succeed, Alvarado soon earned his GED diploma and was able to enroll at TSTC as a Cyber Security Technology student.

“It all happened so fast,” said Alvarado. “I credit a lot of my success to Melanie Pruett, my TSTC enrollment coach, because she helped me kick-start everything.”

He added how intimidated he was by TSTC because he had no high school diploma, but his time at the college has shown him how the seemingly impossible can be possible.

“TSTC was able to turn a man who felt beat down into a career man,” he said. “I can now pursue my passion of computers and technology, thanks to the education and training I received at TSTC.”

Of course, the journey didn’t come without challenges.

“I was no expert on computers coming in,” he said. “My instructors, though, helped me understand everything and always pushed me to keep going and cross that finish line. And because of them, I even became a lab assistant helping other students. It’s funny how things work themselves out.”

The father of four said balancing a family life as a full-time student was demanding, but his religious faith kept him going, and being able to study while his children did their homework kept him motivated.

“My family are my biggest supporters. They supported me throughout my journey,” he said. “I want to be a good example for my kids. They do what they see, so I wanted them seeing me working hard and overcoming obstacles. If I can do it, so can they.”

Alvarado’s experience, however, not only inspired his children, but also his 18 brothers and sisters.

“There are several who always wanted to get their GEDs and even maybe go to college, so I feel like my experience at TSTC has helped me pave the way,” said Alvarado. “TSTC is changing the dynamics of my family and opening doors of opportunity.”

Alvarado is exploring his career options and hopes to work for a surrounding school district’s information technology or networking department. Ultimately he hopes to open a business.

“At the beginning of all of this, I was so nervous,” said Alvarado. “But my life has changed so much, for better, because of TSTC. And I encourage others who think it’s impossible to embrace the challenge and give TSTC a place in their lives.”