(HARLINGEN, Texas) – At an early age, Abel Garcia was responsible for supporting his mother and brother. But with his learning disorder, not many people believed he could become a college graduate and earn gainful employment.

But this Friday, the 23-year-old will prove his naysayers wrong and earn a certificate in Machining from Texas State Technical College. Additionally, he already has a job in his chosen field.

Garcia will join more than 300 other students who will earn certificates or associate degrees during TSTC’s Commencement Ceremonies at the Harlingen Convention Center tonight at 4 p.m. and 7 p.m.

“It took me a while, but here I am. I took it one day at a time,” said the San Benito native. “I never thought I would see the day I would graduate from college. I’m ready to finish strong.”

When Garcia first enrolled, he was nervous about how he would succeed with dyslexia, a disorder that makes it difficult to read or interpret words, letters and other symbols. 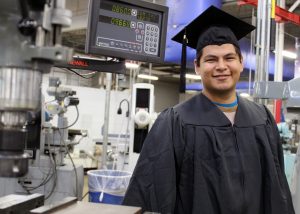 “Everything I look at, letters or numbers, gets jumbled. But with determination, studying and the help of my instructors and other TSTC resources, I was able to learn and pass my classes so I could graduate,” he said.

Unfortunately for Garcia, midway through his program he had to make the difficult decision to leave school to become his mother and brother’s caretaker and to work to afford their medication.

His mother suffers from blood clotting and strokes, while his brother has bradycardia, or a slower-than-normal heart rate.

“We’ve moved from house to house. We’ve never had a place to call our own because I couldn’t afford food, medication and a place to live working small jobs,” said Garcia. “It’s been really difficult, but I keep a positive outlook and a smile on my face for my family.”

Fortunately, Atlantic Durant Technology Inc., a metal fabrication company in Harlingen, gave him his big break and hired him as a part-time employee for the experience he had already gained in TSTC’s Precision Machining Technology program.

He has already celebrated his one-year anniversary at Atlantic Durant and will continue working with the company upon his graduation.

“I went up and down Harlingen’s industrial park applying for jobs, hoping someone would give me a chance,” said Garcia. “Luckily, Atlantic Durant gave me an opportunity to be a part of their team.”

Garcia added that this job allowed him to support his family and keep them comfortable during their difficult time.

“This has been a long time coming. What a process,” he said. “I wanted a change for me and my family, and TSTC has given me the opportunity.”

He said his Precision Machining Technology instructors, Ricardo Limas and Isaac Gonzalez, have always stayed in touch, even while he wasn’t in the program, to check on him.

“Not many instructors or colleges care this much about their students,” said Garcia. “But at TSTC, I never felt alone. There were so many people rooting for my success and who genuinely cared about me.”

Garcia will return to TSTC in the fall to pursue an associate degree in Precision Machining Technology and Mechatronics, joining his brother, who also recently enrolled at TSTC after seeing how the college has changed Garcia’s life.

“My family has been my biggest support system. They never doubted me,” he said. “They have tried working to help me, but I know it’s difficult for them. So I’m glad that TSTC has led me to a successful career so they don’t have to worry. And now, it’s time for me to cheer on my brother also.”

More than 1,000 students will graduate from TSTC this month statewide.