Guest speaker Terry Cook, the Williamson County commissioner for Precinct 1, cited a 2018 manufacturing skills report from Deloitte indicating there will be 2.4 million unfilled manufacturing jobs by 2028 with an economic impact of $2.5 trillion.

Cook cited the report’s proclaiming of a Fourth Industrial Revolution, a time now requiring workers to have skills in critical thinking, computers and tools. She said soft skills, including creativity and attention to detail, will be looked at more.

“Every day will be a new challenge,” Cook said.

She told graduates they are worth every dollar they are paid and not to undervalue themselves.

“Make sure you get your worth,” Cook said. “You are a huge part of our future.”

Many of the graduates already have jobs.

Raymond Multer of Red Rock in Bastrop County received an Associate of Applied Science degree in Welding Technology. He attended classes at night so he could work during the day.

“I knew a little bit (about welding), but I like hands-on learning,” Multer said. “I learn better when I get to touch stuff.”

Multer said he was happy his mother could see him walk across the stage. After the ceremony, he and his family were going to eat barbecue.

Multer is working in the maintenance area at Darling International in Bastrop.

Some of the graduates will continue job hunting.

“It is pretty awesome,” he said. “It’s seems to have gone by in a blink. It (TSTC) has met my expectations, and it is where I felt like I should be.”

This was the fourth commencement ceremony held on campus. Previous TSTC in East Williamson County ceremonies have been held in conjunction with Texas State Technical College’s Commencement in Waco.

TSTC has more than 1,000 students graduating this spring across the state.

For more information on Texas State Technical, go to www.tstc.edu. 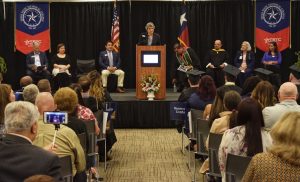