(ROSENBERG, Texas) – Rene Escobar was the only student at Texas State Technical College in Fort Bend County to earn a gold medal at the SkillsUSA state competition held recently at TSTC in Waco.

“When I heard my name, I could not believe it,” said the 24-year-old. “I know I worked hard preparing for the competition, but it was still a surprise. It was a proud moment.”

The gold medalists will advance to the 2019 SkillsUSA National Leadership and Skills Conference in Louisville, Kentucky, on June 24-28.

At the competition Escobar had two hours for the written exam and 15 minutes to complete each skills station, which included hands-on projects in areas such as engines, transmissions, electrical, air conditioning and hydraulics. 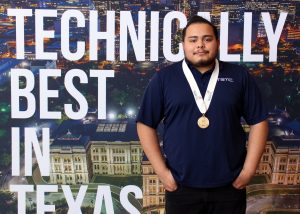 “I prepared night and day for SkillsUSA,” said Escobar. “I spent my time at the diesel labs after class and worked closely with my instructors to make sure I was competition ready.”

Escobar said he even downloaded the electronic versions of his textbooks onto his phone so he could study wherever he wanted.

Escobar expects to earn an associate degree in Diesel Equipment Technology in August and said although he was nervous and put in a lot of time preparing, the training he has received while enrolled in the program helped him face SkillsUSA with confidence.

“There were some areas I had to give extra attention to while studying, but for the most part I felt fully prepared because of the training our instructors provide,” said Escobar.

This also was not the Diesel Equipment Technology student’s first rodeo. In fact, he competed in last year’s SkillsUSA competition in the same category and earned a bronze medal.

Escobar said SkillsUSA has allowed him to network with like-minded people and showcase his skills to industry professionals, which has opened up doors of opportunity he never expected to receive.

“SkillsUSA is not only about honing in on technical skills, but also growth as a leader and communicator,” he said. “It’s about preparing us for the workforce and ensuring that we’re well-rounded students and professionals.”

Escobar is already receiving job offers and has a lot to consider.

Escobar added that as someone who had his mind set on automobile mechanics, TSTC’s diesel program and SkillsUSA has opened up a whole new world for him.

“Before TSTC, I was working at auto shops and my parents were pushing me to go back to school, while my uncle was pushing me to pursue diesel mechanics,” he said. “And it was TSTC commercials streaming nonstop on Pandora internet radio that made me research TSTC.”

It was during this research that Escobar discovered he could earn a two-year degree in Diesel Equipment Technology and enter an industry where diesel mechanics are always in demand.

“Diesel mechanics is so broad — there are many areas I could specialize in,” said Escobar. “And all aspects excite me and motivate me. I’m really happy to be where I am today and that Pandora annoyed me with TSTC commercials. It changed my life.”

For more information on the programs offered at TSTC, visit tstc.edu.