(ROSENBERG, Texas) – Two years ago when Hurricane Harvey devastated the Gulf Coast, Texas State Technical College student Nolen Maraman and his family lost their home to flooding, forcing them to start over, yet through it all he also found a new career.

“We had to evacuate north, in the middle of the storm,” said the 22-year-old. “And as we were leaving, I saw a number of electric companies arriving. There were men and women ready to get power up and running the moment the storm moved out of our area. To me that was intriguing and brave.”

Maraman would spend the next several days researching about what an electrical lineworker is and does. 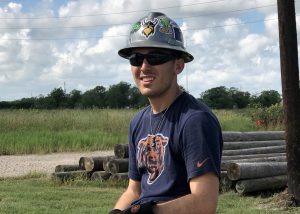 “It didn’t take long for me to realize that becoming an electrical lineworker is what I wanted to do,” said the Cat Spring native. “It’s a career with many opportunities to offer, including the chance to help others.”

There was only one thing delaying his start at TSTC, and that was his last semester at Sam Houston University, he was only a few months away from graduation.

Maraman went on to earn his bachelor’s degree in business management, but he said it was only a path for him to follow, not what he wanted to do. He had found his true passion, and that was at TSTC.

“At first my family was a bit skeptical about me not pursuing a job with my degree, and returning to a technical college,” he said. “But after I showed them the number of job opportunities that would be available to me, how in demand my skills would be and my projected salary, they trusted my choice and were supportive every step of the way.”

He expects to graduate in August with a certificate in Electrical Lineworker Technology and said that the training he has received in his program will allow him to hit the ground running when he enters the workforce.

“I came in completely new. I knew nothing about the field,” said Maraman, “But because of the program’s experienced instructors and the hands-on, real-world training they provide to their students with an on-campus pole yard, I now know the foundation and the basics that I need to be a successful lineman.”

Maraman added that not only has he found his passion and new career, but he has also found happiness.

“I can honestly say I’m happy now,” he said. “I’m working toward a career that helps others, that I’m passionate about and that gives me room for growth.” 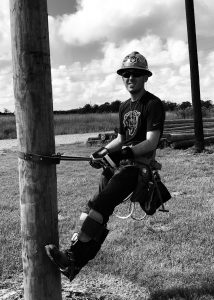 In fact, both of Maraman’s parents received a technical education. His mom began her career as an emergency medical technician and his dad is an underwater welder.

“Technical education fuels our workforce,” said Maraman. “In my experience, my certificate is giving me more job opportunities than my bachelor’s degree, it’s unbelievable.”

Maraman also said that he highly recommends TSTC and the many programs being offered.

“These are life-long careers, not just jobs,” he said. “And I’m excited to begin mine. And I have (Hurricane) Harvey to thank for this.”

Graduates from TSTC’s Electrical Lineworker Technology program, also offered at the college’s Marshall and Waco campuses, can expect to be in demand for the nation’s highest paying career. Texas employs more lineworkers than any other state.

According the U.S. Bureau of Labor Statistics employment of lineworkers is expected to grow eight percent, and job opportunities will be best for persons with good technical and mechanical skills. In 2018 the median annual wage was more than $70,000.