(SWEETWATER, Texas) – What says state pride louder than a 15-foot-tall monument in the shape of Texas?
Texas State Technical College in Sweetwater completed the construction of its new sign at the campus entrance in early May. The monument is similar to ones being placed at each of TSTC’s other nine locations.
“The sign is part of the new look and branding of TSTC. These signs are being installed on all the campuses across the state,” Maria Aguirre, senior executive director of
TSTC Communication and Creative Services, said. “Our campuses in West Texas — Abilene,
Breckenridge, Brownwood and Sweetwater — are getting the updates on this cycle.”
The signs not only mark the entrance to each campus, but also serve as symbols of statewide unity.
Before its single accreditation in 2014, each TSTC campus operated somewhat independently. Now the unified college has solidified its reputation for providing the Texas workforce with some of the most highly skilled technicians available.
The statewide “way-finding” initiative is being implemented by the TSTC Facilities, Planning, Construction and Maintenance department.
“I was very excited about it. I’m always excited when we get to build something, and it was very much needed,” Raymond Fried, associate vice chancellor of TSTC Facilities, Planning,
Construction and Maintenance Services, said.
The first sign was installed at the Fort Bend County campus in the fall of 2016.
For more information about TSTC, go to www.tstc.edu. 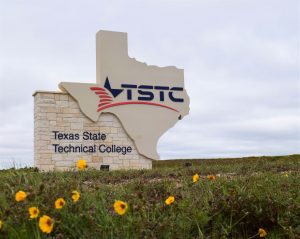 The new monument standing at the entrance of TSTC in Sweetwater is 15′ tall and is similar to ones at Texas State Technical College’s nine other campuses.