Five-year-old Luke Harris received his own lineworker helmet and a TSTC Electrical Lineworker Technology poster from the faculty and students. The youngster learned how to operate a digger truck and run wire up a pole. He also gave directions to the students during a pole circle exercise.

“You can never begin too young to have an impact from an education standpoint,” said Eric Carithers, statewide chair for TSTC’s Electrical Lineworker Technology program.

Harris’ visit stemmed from a photograph his father, Matthew Harris, took of his son with a lineworker from Southwestern Electric Power Co. (SWEPCO) working in his neighborhood on May 11. SWEPCO workers were restoring power after a storm with straight-line winds caused more than 70,000 power outages in the area on May 8, said Mark Robinson, a SWEPCO external affairs manager in Longview.

The elder Harris noticed his son looking out the window at the activity taking place near their house. He said his son has been interested in power poles and likes climbing, especially up trees.

“Luke pops out, and he’s got his own little lineman outfit put together that his brother helped him with,” the elder Harris said.

Luke’s father said he could go in the front yard and wave the lineworkers.

Robinson came across the photo on social media and took some promotional items from SWEPCO to the younger Harris and his siblings and asked if the photo could be shared on the company’s Facebook page. 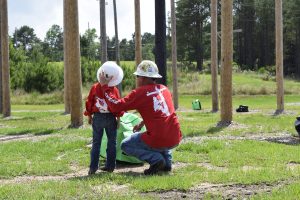