(ABILENE, Texas) – As the aviation industry looks toward the future, one Texas State Technical College student is helping to preserve its history.

“It’s my passion. As a kid, I always liked airplanes. So when I got tired of working on cars as a mechanic in the Dallas-Fort Worth area, I decided it was time for a change,” Calsoncin said.

Since starting at TSTC in fall 2017, Calsoncin has worked with Ezell Aviation in Breckenridge.

“I’m from Breckenridge, and I’ve known the (Ezell) family for years, so I would go out there in my free time and follow the owner, asking him questions. A couple days after I started school at TSTC, he called me up and offered me a job,” Calsoncin said.

Ezell Aviation restores vintage military airplanes and has completed 34 restorations in its 33 years while also performing inspections, maintenance, and major and minor repairs on many others.

“He’s a good kid, hard worker and has lots of ambition,” Heather Ezell, office manager at Ezell Aviation, said. “Nelson (the company’s founder) encouraged him and is very proud of him.”

Calsoncin said one of his favorite parts of the job is how unique the work is and that it usually coordinates with what he is learning in class.

“This program at TSTC is good, it really is. Somehow it’s been working out that I’ll learn something in class and it ends up being something I use at work almost right away,” he said.

“Trenton has been a great student and has always been willing to help his fellow students by sharing the skills that he has brought from working in the aircraft restoration business,” Parker said.

As he completes his degrees, Calsoncin will continue to work at Ezell Aviation.

“I plan on staying there after graduation for as long as they’ll have me. It’s kind of like a dream job for me,” Calsoncin said.

Calsoncin is expected to graduate in summer 2019. 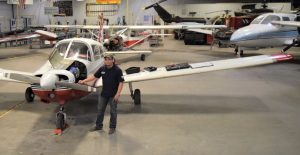