(HARLINGEN, Texas) – It was May 2009 in the neonatal intensive care unit when life changed for Texas State Technical College vocational nursing alum Jesus Herrera and he realized nursing was his life’s passion and path.

The 35-year-old’s eldest daughter was born with gastroschisis, a birth defect of the abdominal wall in which the baby’s intestines are found outside of the baby’s body, and Herrera came to respect  the nurses that they relied on to keep their baby safe during her two-month stay in the hospital.

“This was a really difficult time. I hated leaving her there, but the nurses seemed to make everything less scary,” said Herrera. “This is when I knew that I wanted to become a nurse and be the same kind of security and support for others.”

“Everything I do, I do for my children; for my family,” he said. “They are my everything and make it all worthwhile.”

It was only a couple of years after this life-changing moment that the Mexico native and now father of three decided to enroll at TSTC to complete his nursing prerequisite courses.

“Throughout my educational journey I have come so close to quitting,” he said. “My family and I have had to overcome some great obstacles, but each time I had someone from TSTC rooting for me and being my strength, making it possible to continue.” 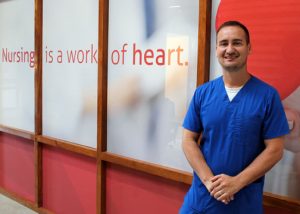 It took about four years, but the Harlingen native graduated with a certificate as a nursing assistant in 2017 and as a vocational nurse in 2018, with an almost-perfect 3.9 grade-point average.

He said he achieved all of this while juggling a family and two jobs because he had to make ends meet. He describes this period as not only a sacrifice for him, but also for his wife and children.

“I hit a dark moment in my life during the vocational nursing program,” he said. “Anxiety got the best of me. Everything was piling up and I thought for sure I was dying.”

With no health insurance and most of his money tied up in school and family needs, Herrera did not have the money to pay for a doctor visit.  Eventually he was forced to seek medical help to help him overcome his anxieties.

Despite the pressures he was facing and his health scare, he gained a new career and he credits his success to all of his nursing instructors.

“It was the strength that my instructors exude that helped me stay focused on my end goal,” he said. “They empathized with me, they were there for me and never let me quit. For that, I thank them. It’s because of them I’ve found success for me and my family.”

Herrera now works as vocational nurse at Valley Baptist Medical Center in Brownsville in the telemetry unit specializing in the cardiovascular system.

And only last week, he got his acceptance letter into TSTC’s registered nursing program. He will return to the college in the fall.

“When I received my acceptance it was a celebration for the entire family,” said Herrera. “This next year is going to be another large hurdle for my family one I plan to overcome, but when I came to the United States in 2000 for better opportunities, I promised myself the ‘American Dream.’ And TSTC is helping me achieve that.”

Herrera said he’s ready to face this next year and do whatever it takes to be successful because his ultimate dream is to not only become a registered nurse, but also buy his family a house to call their own.

“I want to continue teaching my children that’s it’s not about being smart. It’s about how hard someone works and how dedicated they are to achieving their goals,” he said. “This next year is what’s going to help me take my career to the next level.”

TSTC also offers nursing at its Breckenridge and Sweetwater campuses.

Graduates from this program will enter an occupation that, according to the U.S. Bureau of Labor Statistics, is expected to grow 15 percent, much faster than other occupations and is in demand across the state and especially in South and West Texas, moth medically-underserved regions. Graduates can expect to find careers at hospitals, clinics, long-term facilities or anywhere nursing care is needed.

Registration for Fall 2019 is underway.