The Avery Award was established in 2000 by Johnnie Lou Avery Boyd to celebrate TSTC staff employees who go above and beyond to serve the mission of the college. Only one winner is selected from all four TSTC campuses in West Texas.

“Debbie is a great asset to TSTC and a wonderful ambassador for the college and the Breckenridge campus. She is always willing to do the hard tasks that others may shy away from — with that ever-presentt smile on her face,” TSTC Provost Rick Denbow said.

Karl said hearing her name called was shocking at first, but it was also very validating.

“I was not expecting it. I was very humbled and honored because I worked with Mrs. Avery (Boyd) when she was at TSTC, and she was the epitome of good customer service, internally and externally, and hard work. So, to win an award in her honor was very humbling,” Karl said.

With over 26 years of service, Karl has held various roles in the college. She started her career at the Abilene campus working in Continuing Education. Later she became an instructor of Business Management Technology and Computer Networking Systems Technology, then was named associate vice provost of Student Learning.

Karl moved back to her hometown three years ago, assuming the role of associate provost of TSTC’s Breckenridge campus and executive director of Institutional Accreditation.

“I believe in what we do for our students. We change lives. I believe it so much that I put my son through the diesel program,” Karl said.

Karl’s son, Zach, was in attendance when she was presented with her award.

“My son is in the military; so having him there to celebrate with me just made it even more special,” she said.

To win the Avery Award, employees must be nominated by their co-workers with supporting letters of recommendation. The winner is selected by an independent third party.

Cassie Love, an enrollment coach at TSTC, said her recommendation letter was just one of many supporting Karl.

“We are so blessed to have Debbie here. She is so deserving of this award because she just puts her heart and soul into this place and is always so welcoming,” Love said.

With over 26 years of memories at TSTC, Karl said it is hard to pin down a favorite. But if she had to choose, it would be the time spent getting to know her co-workers.

“We all eat lunch together in one of the classrooms every day, and it’s just a great way for me to get to know my co-workers and their families,” she said.

For more information about TSTC, log on to tstc.edu. 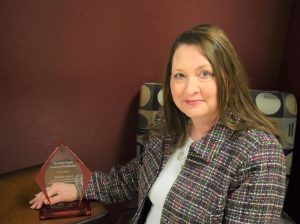