TSTC’s Career Services office hosted an interview practicum at the South Building on the Marshall campus for students to sit down with TSTC staff for mock interview sessions.

“I want the students to get used to talking to people they aren’t used to,” said Hannah Luce, TSTC’s Career Services coordinator. “I hope they are more confident going into a real-world interview.”

Natasha Davis, a Computer Networking and Systems Administration major from Longview, said she found the practicum valuable because she had not received feedback after doing professional interviews before.

“I worked really hard at hiding my nervousness,” she said. “I learned not to question myself so much in interviews.”

Devon Edwards, an Electrical Lineworker Technology major from Palestine, said he was confident during his mock interviews. Edwards said it was good to be prepared for unexpected interview questions.

“It is good practice,” he said. “It helps you when you get in the real situations because you can answer the questions.”

Students received insight from the interviewers during and after each of their three 10-minute sessions.

“That last round, they (the students) seemed more relaxed and were taking some pointers from other interviewees,” said John Balensia, an instructor in TSTC’s Electrical Lineworker Technology program. “But, they need to work on their verbal skills and work on their job experience.” 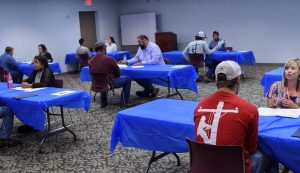