(WACO, Texas) – The city of Hillsboro has more than 20 computer servers spread among city-owned buildings.

For Gude and Stroud, the learning never stops.

“I look at what other cities are doing, and if it works for them, I try to implement it,” Gude said. “I read up on a lot of stuff, and we try to go to different trainings.”

Gude said one of his responsibilities is coming up with new technology to help the city function better and reminding staff to change their passwords to maintain security. Gude and Stroud are currently working to shift the city to a Cisco Meraki cloud-based system.

Gude grew up in Marlin and had an interest in computers. He received associate degrees in 2012 from TSTC in Computer Networking and Systems Administration and Network Security Technology.

He started working at Hill Regional Hospital in Hillsboro during his last semester in college and stayed for four years before moving into municipal government.

“That was a big deal to be in class and go to work and try something,” Gude said. “I was also exposed to working with clients.”

Stroud said an average day for him involves fixing network, internet and printer issues, along with working with vendors. There are also issues with cell phones, laptops and desktop computers that arise among the roughly 100 full-time city employees. He is also called upon to do forensics work for the Hillsboro Police Department.

Stroud learned about the job opening in Hillsboro through a TSTC Alumni Association email.

He grew up in Temple and spent 18 months in the U.S. Army.

“I had an interest in technology in high school, but I went into the military after high school,” Stroud said. “I didn’t think straight out of high school I was mature enough for college.”

Stroud has associate degrees in Cyber Security and Digital Forensics Specialist from TSTC. While at TSTC, he was a student worker in the Cyber Security program.

“Nathan always strived to do the best job at whatever he was doing,” said Derek Smith, an instructor in TSTC’s Cyber Security program in Waco. “Whether it was in the classroom or completing his duties as a student worker, he always gave you his best at whatever he did.” 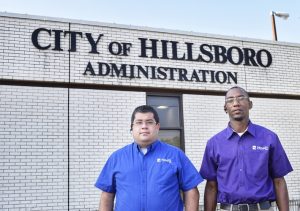