(MARSHALL, Texas) – Nicholas Delaurelle of Longview is relieved that he has been hired for a job before he graduates from Texas State Technical College.

“It is reassuring making some money, because I have bills to pay,” he said. “I’ll be moving into an apartment the day after graduation.”

Delaurelle is one of more than 30 candidates for graduation at TSTC’s Summer 2019 Commencement at 6 p.m. on Friday, Aug. 16, at the Julius S. Scott Sr. Chapel at 711 Wiley Ave. in Marshall. Delaurelle is scheduled to receive a structural welding certificate from the Welding Technology program.

“It’s been a pretty good amount of learning,” he said. “I really enjoyed TIG (tungsten inert gas) welding and the torch itself, watching the metal melt into the joint. I enjoyed learning how all the torch stuff works and how the processes differ so much.”

Philip Miller, an instructor in TSTC’s Welding Technology program, said Delaurelle could have gotten a job anywhere with his skills and work ethic.

“He was probably one of the best (students) we have had,” Miller said. “He could make a 98 on a test and ask to retake it. He hit over the mark every time.”

“We hope they get hired before they graduate,” Miller said.

Delaurelle is a 2018 graduate of Pine Tree High School in Longview. He originally wanted to be an auto mechanic, but he changed his mind once he took a welding class during his senior year and found he enjoyed the work.

“Some people think (welding is) hard, but they don’t know how to deal with the conditions,” Delaurelle said. “If you have a strong will, you can deal with it.” 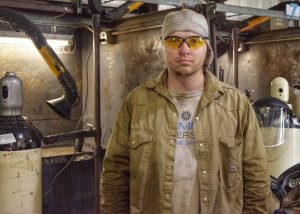