“The honor is very prestigious,” said TSTC’s Lt. Roman Proctor. “Even though officers face a lot of different challenges and have certain things they are recognized for, being recognized for saving someone’s life is paramount.”

According to the Lacy Lakeview Police Department, the officers answered the late evening call for help on North Rita Street. When the officers arrived, they found a 64-year-old woman having medical issues and who was unresponsive. When the woman’s breathing and pulse stopped, the officers began CPR) and used an automated external defibrillator to revive her.

“We all switched out doing CPR and moving her off the bed and moving around the furniture,” Rowell said.

Rowell said he did what he was trained to do in the situation.

“You never know what the day will bring,” he said.

An ambulance arrived at the scene and took the woman to an area hospital as an officer rode along to continue administering CPR. Unfortunately, the woman died a few days later, according to the Lacy Lakeview Police Department.

Rowell grew up in Waco and was home-schooled. He said he always wanted to be a police officer to help serve a community. He is a graduate of the McLennan Community College Law Enforcement Academy.

Before joining TSTC’s police force, he worked for two years for the Woodway Public Safety Department.

“He (Rowell) adds value to our department as far as his willingness and his service to us,” Proctor said. “He helps out by always being available to assist when needed.” 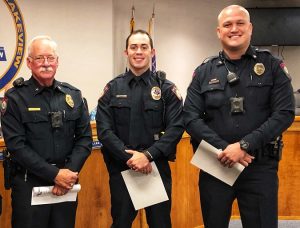