(WACO, Texas) – More than 1,000 Texas State Technical College students met potential employers from Texas and throughout the nation on Thursday at its semiannual Industry Job Fair on the Waco campus.

Students lined up to register about a half hour before the 9 a.m. start of the event at the Murray Watson Jr. Student Recreation Center. Inside, students were treated to more than 100 companies looking to fill job, including those for aviation mechanics, electricians, materials handlers and plumbers.

Kirby-Smith Machinery Inc., which has locations throughout Texas, Kansas, Missouri and Oklahoma, has attended several of TSTC’s employment events. The company was looking for talented diesel technicians.

“We are building goodwill with the college and community,” said Seth McColley, Kirby-Smith Machinery’s vice president of human resources. “We want to make sure we have a good presence.”

Representatives of Niagara Bottling Co. visited to recruit electrical, mechatronics and robotics technology workers in anticipation of its $90 million bottling and distribution plant opening later this year in Temple.

Danny Weckstein, a company manufacturing technology manager based in Ohio, said he travels throughout the country to college recruitment events. He said students coming to work for the company bring a fresh perspective on how machines operate.

Some TSTC alumni returned to campus to recruit.

Zachary Rickard, a 2017 graduate of TSTC’s Building Construction Technology program, is an assistant superintendent at MW Builders in Pflugerville. He has traveled throughout Texas and Kansas to work on the company’s commercial projects. He said his job includes keeping up with work schedules, doing some hands-on work and keeping workers on task.

Rickard said it felt good being back on campus.

“TSTC has had a major impact for me in starting from nothing to what I’m doing now,” he said.

Kyle Brinkman, an electrical computer-aided design drafter at Black & Veatch in College Station, graduated in 2011 from TSTC’s Architectural Drafting and Design program. He said going to TSTC was the right fit for him because he wanted to save money and get a good education.

Brinkman’s goal was to tell attendees about the company’s work in consulting, construction engineering and procurement for the manufacturing, telecommunications, and oil and gas fields.

“It is very encouraging that the stuff we learn today in our classes is what the companies need,” she said. “It’s a good feeling.” 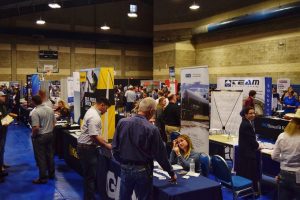