(HARLINGEN, Texas) – With no intention to go to college, Texas State Technical College Mechatronics Technology alumnus Matt Lashbrook is now thankful that he did, because he said college took him from rags to riches.

The Rio Hondo native always put effort into his schooling, even taking dual enrollment courses while in high school, yet he didn’t think he was cut out for college.

“I had no idea what I wanted to do and when my aunt told me about mechatronics I figured I had nothing to lose,” said Lashbrook. “I did it to try it and I was surprised.”

That aunt that encouraged Lashbrook to enroll in Mechatronics is TSTC Associate Provost Jean Lashbrook and the younger Lashbrook said he’s glad he took her advice.

Today Lashbrook is the Project Automation Analyst for Chevron, where he has worked for six years with benefits and a competitive salary that continues to increase. 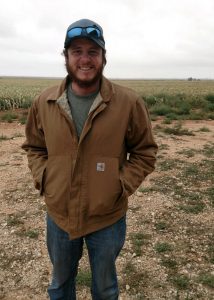 “I was still 19-year-old when I got this job,” said the now 26-year-old. “I hadn’t even graduated from the program, yet I had a career lined up for me.”

Lashbrook started at Chevron immediately after graduating with his associate degree in 2013 as a field specialist trainee, and within his six years with the company, the foundation he built in TSTC’s Mechatronics Technology program and his hard work have earned him several promotions.

“While at TSTC I found that I really enjoyed automation. It just clicked; I found what I was good at and my interest in the field grew,” he said. “And now my position allows me to hone in on those skills.”

From digging ditches to bury conduit pipes and traveling across Texas and New Mexico sites, Lashbrook said each level of his career has allowed him to support his family and remain debt- free.

“My wife and I used to live in a camper and now we own a home, a car and a truck and none of it is owed,” said Lashbrook. “This career has allowed me to save and give my wife and daughters the life they deserve.”

Lashbrook said TSTC was the stepping stone to this great career and life that he has made. From the instructors and the one-on-one, hands-on training they provided, he was able to become well-rounded in several areas and sharpen his skills.

“I grew up working on boat motors and never, in a million years, did I think I would be where I am today,” he said. “It’s been hard work to grow, but I remain steadfast in learning and always remaining teachable.”

Lashbrook added that enrolling at TSTC was the best decision he made and he is always recommending it to others who are looking for a new career or a career change.

“I don’t just recommend TSTC, I encourage others to attend because if you’re looking for a career, this is the place to go,” said Lashbrook. “And I’m proof because with my degree I’ve found opportunities I never thought would be possible. Without TSTC I wouldn’t be where I am today.”