(HUTTO, Texas) – Tucked among a cluster of brick buildings on Research Boulevard in Austin is a technology company that has found a source for employees in Central Texas.

“Contigo is a great opportunity for our students,” said Joshua Schier, an instructor in TSTC’s Cybsersecurity program. “They are a fantastic employer offering great pay and benefits for entry-level positions. And, they are putting students in a position to succeed and grow with the company.”

Some of the skills students in TSTC’s Cybersecurity program learn include intrusion detection, Linux installation, and server virtualization and intrusion. The program’s goal is to give students a foundation of knowledge in networking and networking security.

“Many of the students have done projects and assignments together as a team while in school,” Schier said. “They developed friendships and team-building skills while here at TSTC, and that is being carried over into their work environment at Contigo.”

The company has 22 employees who work with clients using Microsoft platforms. Fuller said a majority of the company’s work is preventive maintenance, while project work is also undertaken.

“Everyone has a role to play,” said Bryan Fuller, president of Contigo Technology. “Everyone is being taken care of as long as the customer is taken care of.”

Travis Hoffmeister played baseball and graduated from Texas Tech University before finding his way to TSTC’s Cybersecurity program. He said attending TSTC gave him more focus for his career. He said a hiring company recommended that he give Contigo Technology a look when he was job searching.

He is a project engineer who migrates data and email between hosts at the company.

“I’m happy with it,” Hoffmeister said about his job. “I didn’t know what to do outside of Texas Tech. At TSTC, it was a broad curriculum. It helped me see a wide swath of fields to get into.”

Kyle Banks and Isabelle Pomeroy are remote operator technicians at the company. The two had classes together at TSTC and graduated a semester apart from the Cybersecurity program.

“We are the main contacts when it comes to issues with the clients and with their devices or technical questions,” Banks said. “We troubleshoot and get them fixed.”

Pomeroy said she enjoys her job because she discovers and figures out problems for customers.

Javier Bustos is a candidate for graduation for an Associate of Applied Science degree in Cybsersecurity at TSTC in December. He has worked part time since May, troubleshooting and setting up customers’ computers.

“TSTC has hooked me up with a job, which is awesome,” said Bustos, who grew up in Manor.

Bustos said he does not have a problem asking for help from his co-workers when needed.

“I really enjoy it,” he said. “At first it was intimidating. It was my first exposure to a business environment with information technology.”

Fuller said the quality of life for his employees is important. Company employees work in staggered shifts to manage Austin’s traffic. There are also opportunities for employees to work from their homes.

“I don’t want turnover,” Fuller said. “I try to make it a fun environment. I require them to be good at what they do.” 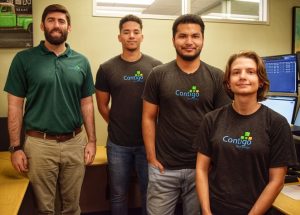