TSTC students can get a personalized TSTC/Waco Transit identification card at the campus Student Services Center to begin riding.

“TSTC has partnered with Waco Transit for years to provide service to our campus, but this arrangement expands the service for our students to ride any fixed route on Waco Transit at no cost,” said Adam Hutchison, TSTC’s provost for the Waco campus. “Some of our students don’t have access to reliable transportation on their own, and now they can use Waco Transit anywhere in the city — not just TSTC — for free.”

TSTC is included on Waco Transit’s Route 5, which includes stops at H-E-B, Walmart and the Texas Department of Motor Vehicles. Students can ride on any of the transportation system’s 10 routes encompassing all parts of Waco and some locations spread out in McLennan County.

“We do our best to hit all the time points,” said Joseph Dvorsky, Waco Transit’s director of service development. “We have major construction going on with Interstate 35, and what we do is we detour routes to keep them on time.”

Waco Transit uses a flag-stop system for its routes, which means people can flag down buses to be picked up along fixed routes. Dvorsky said bus drivers can pick up riders if they are on the correct side of the street and if there are not traffic-flow issues.

Waco Transit had 1.3 million unlinked passenger trips in 2018, according to Dvorsky.

To see Waco Transit’s bus routes, go to waco-texas.com/transit/routes.asp or download the Ride Systems app on a smartphone. 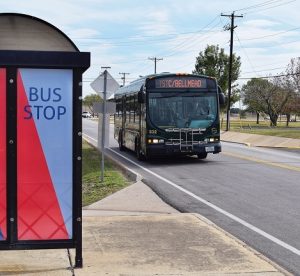