(WACO, Texas) – Ricardo Echeverria of San Angelo did not go to college right after graduating from the city’s Central High School in 2017.

He went to work at Mitchell Toyota in San Angelo as a lube technician, but said he knew he needed to advance his career.

A dealership employee recommended that Echeverria give Texas State Technical College’s Automotive Technology – Toyota Technician Training and Education Network, or T-TEN, specialization a look. He began classes at the Waco campus in fall 2018.

“It’s been really good,” Echeverria said. “It’s a lot of hands-on and very informational. The instructors have been good teaching and spending one-on-one time with us.”

Echeverria said his favorite lessons have dealt with engines.

“We get to take the engine apart, and we put it back together and make sure the specs are correct,” he said.

During the summer, Echeverria went back to work at Mitchell Toyota as a main line technician diagnosing and fixing customers’ problems.

“The technicians are very helpful and understood I was a student,” he said. “It opened my eyes to the real world.”

Tony Palmer, Mitchell Toyota’s service manager, said he likes Echeverria’s motivation to better himself. He said students like Echeverria are good for programs like T-TEN.

“If they (students) just had the knowledge that the program is there and if they want to do that type of work in the field, it would be a great option for them,” Palmer said.

After graduating from TSTC, Echeverria said he wants to return to San Angelo to work at the Toyota dealership and later work in San Antonio.

“We can take them from almost knowing nothing to being good technicians,” said Roy “Rip” Plumlee, a TSTC Automotive Technology instructor who teaches some of the T-TEN courses.

The program curriculum was revamped this year to have students spend half of their semesters in classes learning about automotive electrical systems, brake systems, climate control systems and other topics, and the remaining weeks working at Toyota dealerships. Plumlee said students who come from throughout Texas to attend TSTC must maintain work at a Toyota dealership to stay in the program.

Plumlee said he has an agreement with his students for them to send him an email when their salaries reach a high level after graduation.

“I hope they go on to long-term, successful careers at Toyota,” he said. 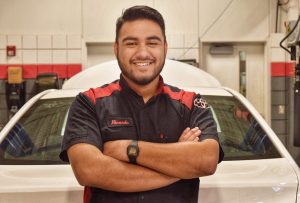