Many of the graduates already have jobs.

Spencer Brown of Austin came to TSTC after working in automotive and construction jobs. He received the Associate of Applied Science degree in Electrical Power and Controls.

“Hands down, this is the best decision I have made to date,” Brown said about coming to TSTC.

Brown said the classes he took were challenging and interesting. And, he feels ready for his next challenge starting his new career at Oncor in Dallas, where he will work in the company’s distribution side.

He is following the degree up with the Electrical Construction certificate he received in 2016 at TSTC. He worked as an electrician and discovered he enjoyed design, which motivated him to return to TSTC.

Some graduates are making plans to job hunt.

Angela Putty of Waco received the Associate of Applied Science degree in Solar Energy Technology and certificates in Electrical Construction and Energy Efficiency Specialist. She said she will take a break during the holiday season to spend time with family and then look for work in early 2020.

Putty said she was inspired to go to college after seeing energy efficiency equipment in action on a visit to see relatives in California.

Putty credited Letha Novosad, a TSTC instructor in the Building Construction Technology program, for being an inspiration in her studies and future career.

“She has a strong personality,” Putty said. “I like seeing a woman in the construction field.” 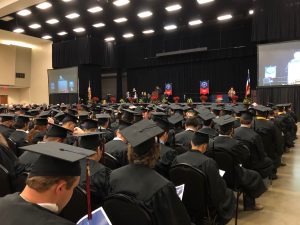