Chef Michele Brown is a member of the Agricultural Culinary Team Manitoba taking part in the IKA/Culinary Olympics in February in Stuttgart, Germany. Brown will handle the team’s pastry arts.

Brown said she is at the point in her preparation to test how to style four different kinds of petit fours on plates. She will also spend time working on the detailed aspects of her desserts, including cocoa painting.

“It is about what makes more sense,” Brown said.

Once in Germany, the team will do final preparations at a kitchen they have arranged to use.

Chef Mark Schneider will compete at the Food & Hotel Asia (FHA) Food and Beverage 2020 in early April in Singapore. Schneider was selected to take part because of his membership in the Epicurean World Master Chefs Society.

Schneider started a stringent training schedule last week, with a combination of preparing ingredients and kitchen equipment along with cooking. He plans to use his competition dish twice for upcoming special events and most likely make minor changes up to the contest.

Schneider has also been doing research on Singapore’s cuisine. He will create a seafood dish for the competition, using local fish and some ingredients that are seasonally available.

“It’s a jump from doing anything in the U.S. or Europe,” he said. 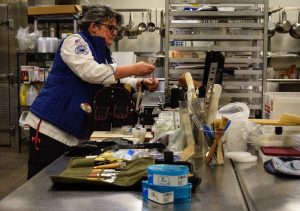