(WACO, Texas) – Javier Arroyo, the die casting process manager at Anderton Castings in Troy, is proud to show off the future to visitors.

This fall, the company will finish installing new equipment to increase production of aluminum high-pressure die castings for the automotive industry. The expansion aligns with the company’s mission to embrace lean manufacturing and become more environmentally conscious.

“It’s an impressive operation they have got,” said Adam Barber, TSTC’s interim executive director of Workforce Training in Waco. “I think their long-term goal is to move to a fully automated process, which is good for them and good for us.”

Barber said companies like Anderton Castings have inquired about training from TSTC for blueprint reading, computer numerical controls, hydraulics, programmable logic controls and robotics. He said requests like these mean companies are moving more to automation and want to empower employees with more technical skills.

The company has looked to TSTC in the past for employees and has hosted student interns. In 2019, the company engaged TSTC for an eight-session training program for maintenance and programming of robots. This year, the company plans to extend its training program with TSTC and support from the state of Texas to retrain more than 130 employees to prepare them with new technologies in manufacturing, hydraulics, electrical troubleshooting and CNC operations.

“If we can hire people that are now in school, they can apply their knowledge,” said Carlos Cervera, the company’s operations engineering manager.

Cervera said employees receive training from the company and from the manufacturers of the equipment used, such as FANUC for its robots. He said students who want to pursue robotics should have a good understanding of geometry and trigonometry.

“What we teach is exactly the type of work they do,” said Brandon McMahan, an instructor in the Robotics Technology program.

Arroyo said it is challenging to find potential employees who know tungsten inert gas welding, die casting and operation of computer numerical controlled machines. He said it is important to grow the skills of the employees they have.

“We want to create a career for them,” Arroyo said.

Jeff Straub, Troy’s city administrator, said workforce training is vital for residents. He sees the city of about 2,200 residents growing in the next few years with the addition of two subdivisions totaling more than 700 homes. And, he hopes more industrial growth happens around Anderton Castings.

“People with more skills tend to have more money,” Straub said. “They can buy a house and be more involved in the community.” 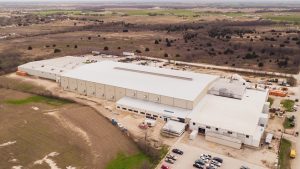