(WACO, Texas) – Kaylee George and John Singer, both from McGregor High School, along with Ezra Stegemoller  from Classical Conversations home school in Waco, were the top winners in the Central Texas Science and Engineering Fair held Tuesday and Wednesday at Texas State Technical College.

The students are eligible to represent Central Texas in the Regeneron International Science and Engineering Fair in May in Anaheim, California.

The winners’ projects were in the Behavioral and Social Sciences category.

George and Singer’s project abstract stated that the purpose of their experiment was to provide basketball coaches with a tool to help players evaluate and adjust their skills, and thus improve their free-throw percentages and number of winning games.

George said a lively discussion about basketball led them to the subject of their project.

“We got into an argument about who shot better free throws. And it turned out that because I’m crossed with my hand and eye, I didn’t shoot as well as my partner did,” she said.

When Singer was asked how he felt about winning, he replied, “Speechless — it feels good.”

Stegemoller’s own difficulty in concentrating when distracting background sounds are present inspired his project.

“Whenever I’m taking a test, I always struggle with noise in the background, and I was wondering if that affected other people around my age,” he said. “So I decided to do it on that.”

Stegemoller’s project concluded, “Although there were not enough subjects to confirm or deny the optimal auditory atmosphere for test taking, the results are substantial enough to draw the general conclusion that students perform best with lyrical music playing.”

There were more than 100 projects from area public, private and home schools. Some of the other topics the middle and high school students studied include chemical transformations, high-tech recycling, and robotics.

The first-, second- and third-place winners in each junior and senior division are eligible for the Texas Science and Engineering Fair in March in College Station.

For more information on the Central Texas Science and Engineering Fair, go to ctsef.org. 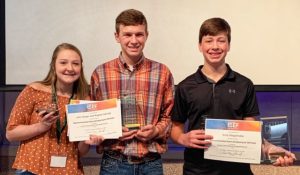