The menu and restaurant’s festive decor was designed by Luis Rodriguez of Hutto, a TSTC Culinary Arts student scheduled to graduate in May.

“I am a huge fan of Louisiana in general,” he said. “I love the culture there and how it feels.”

Rodriguez admitted he was nervous Friday about the restaurant’s opening.

“It was a little hectic in the middle, but we fired on all cylinders,” he said.

Students prepared the meal, seated patrons and served their dishes.

Caroline King, a TSTC Culinary Arts major from Round Rock, said she was excited about the restaurant’s opening week. Her favorite meal on the menu was shrimp po’boys, which could be grilled or fried.

“I love the whole production and being in the hive,” she said. “I’m always excited to cook.”

The restaurant attracted a mix of TSTC employees and area residents.

Timothy Hemesath, an instructor in TSTC’s Precision Machining Technology program, was one of the people making his way to the third floor of the East Williamson County Higher Education Center to eat. He said the Louisiana sunburst steak salad was well prepared.

“The students are learning a valuable lesson on how a restaurant operates, from orders to the happy customers,” Hemesath said.

Morgan Hubbard, a member of the Hutto Independent School District’s board, was taking a box of sugar dusted beignets home to her husband. She said the food and service were excellent.

Chef Nelson Adams, an instructor in TSTC’s Culinary Arts program, said the time was right to reopen the restaurant due to the number of students in the program. The student restaurant was last open more than four years ago, Nelson said.

The restaurant is donation-based, Nelson said. Patrons’ tips and donations in lieu of meal prices go to the Culinary Arts program to support students’ education needs.

The restaurant will be open on Fridays during the spring semester. Future themes and dates include Caribbean on March 6, Trendy Cuisine on March 20, Vietnamese on March 27, Germany on April 3 and Texas Buffet on April 17.

To get a registration link to sign up to attend the restaurant, email Adams at nelson.adams@tstc.edu. 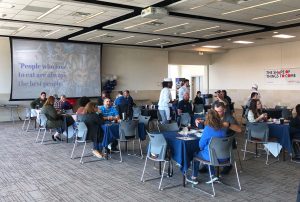