(HARLINGEN, Texas) – More than 40 poles have been installed at Texas State Technical College’s outdoor lab for the new Electrical Lineworker Technology program to debut this fall in Harlingen.

The program is benefiting from the construction of the 12-acre, 100-pole yard at the corner of Rio Hondo Road and 29th Street. Eric Carithers, TSTC’s statewide department chair for distribution and industrial electrical systems, said another 60 poles will be installed before the fall semester begins in August.

“We do have materials in the process of being ordered right now,” Carithers said.

The program’s students will also work toward a commercial learner’s permit, and eventually a Class A commercial driver’s license, in two semesters of the program. Victor E. Blalack III, TSTC’s executive director of Strategic Partnerships, Workforce Training and Continuing Education in Harlingen, said students’ work will be a combination of online and instructor-led training during the first semester.

“The second semester is broken into four, two-week driving sessions, and at the end of a two-week session, that student will be ready to take their maneuvering skills and road examination,” Blalack said. “Upon successful completion of the skills and road test, a Class A CDL will be awarded.”

The need for electrical power-line installers and repairers is projected to grow to about 128,900 jobs through 2028, according to the U.S. Bureau of Labor Statistics. The agency predicts population growth in cities will spur the increase in employment.

Texas had more than 11,400 electrical power-line installers and repairers as of May 2018, according to the federal agency. Cameron County had 130 workers earning an annual mean wage of $56,660 in 2018. 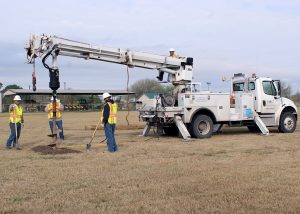