(WACO, Texas) – Jeffrey Potts’ fascination with aviation began when he was in high school in Michigan.

He later joined the military and attended Texas State Technical College’s Waco campus, where he graduated in December 2019 with an Associate of Applied Science degree in Avionics Technology.

“I loved my time in the avionics program,” said Potts, who now lives in Whitney in Hill County. “I learned so many things that I use every day at both work and home, everything from how electronics work to how complex systems interact with each other.”

Three days after graduating from TSTC, Potts began work as an avionics technician at JAG Aviation in McGregor.

Potts said his motivation comes from the American dream.

“Yes, I know that sounds cliche,” he said. “However, I’ve seen what hard work and perseverance can do for people.”

After graduating from high school, Potts joined the U.S. Marine Corps. He trained in California and North Carolina before being sent to the Louis F. Garland Department of Defense Fire Academy in San Angelo. He later served in Hawaii as an aircraft rescue and firefighting specialist.

“I liked working around aircraft so much that I decided to work on them,” Potts said.

Potts chose TSTC because of its aviation programs and the desire to start a new life in Texas. While attending college, he worked part time at Ellison Avionics Services in Waco as an avionics technician performing component-level repairs on avionics systems and radios.

Potts’ advice to prospective students is to pay attention to instructors.

“It was enjoyable having Jeffrey as a student,” said Martin Segraves, TSTC’s chair of the Avionics Technology program. “He’s smart, quick-witted and a skilled problem solver.” 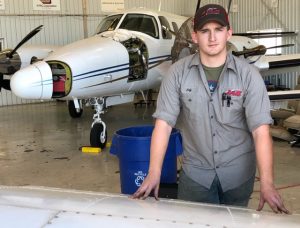