Only the surroundings have changed over the past few weeks, in response to the calls for social distancing in communities around the state. Instructor Emma Creps said the students are using their own kitchens during lab work.

“We had to come up with a different idea for our labs,” Creps said. “We decided to have them do video labs for us.”

One lab for students focused on making homemade pasta. Creps said students had to show themselves making the dough, rolling it out and making pasta.

“They realized this is different. Over time, it started to become easier for them,” he said. “I noticed they were becoming more confident with their working skills.”

Duran said he noticed students were talking through the steps of making pasta instead of referring to notes.

“There is definitely a benefit to this. The students are learning to talk in front of a camera,” he said.

One thing students realized during lab sessions was they had to rely on what was in their own kitchen. Duran said a ravioli recipe called for two different types of cheese. However, students were encouraged to explore their options.

“This allows them to be creative when they are at home,” he said.

One drawback to the video lab is that Duran and other instructors do not get to taste the final product. However, a critic is usually close by.

“They usually get a family member to taste it for us. If they have children in the house, they will try it,” he said.

The video sessions do not stop with making dishes. During a recent dining room video session, students had to set a table and pour a glass of wine while their classmates watched online.

“The students were able to interact with each other, which was really good to see,” Creps said.

Students also had to work in virtual pairs to create a PowerPoint presentation on their selected cuisine.

“In addition to the research, students had to do voiceover work for the PowerPoint. They had to figure out ways to work with their partners,” Creps said. “This assignment is not due yet, so I am excited to see how that comes out.”

Instructors are no strangers to online learning. Two years ago, the department began utilizing technology for class lectures and tests.

“We wanted to make sure, especially in the culinary field, that we kept up with technology,” Creps said.

The biggest challenge, according to Creps, was keeping students’ attention.

“Everyone knows that you can lose a student’s interest in the classroom. We had to be creative and find ways to keep that attention,” she said.

For Duran, he likes the video lab sessions but is ready for a return to the kitchen.

“There is nothing better than that face-to-face connection with the students,” he said. “This could be a way for the students to talk through what they are doing more.” 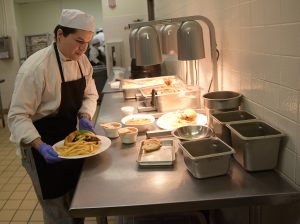