(MARSHALL, Texas) – Dakota Smith of Gladewater learned early on the importance of a good work ethic, especially in a welding booth.

“Once I have something to do, that’s all I focus on until it is completed, and I do it to the best of my abilities,” she said.

Smith is scheduled to receive an Associate of Applied Science degree in Welding Technology this spring from Texas State Technical College’s Waco campus. She already has a structural welding certificate from TSTC’s Marshall campus.

“I was the only girl in my Certificate 1 class for welding,” she said. “I went above and beyond in a class of guys.”

Smith said TSTC Welding Technology instructors Rusty Hutcherson, Philip Miller and Patrick Reed, all of whom teach at the Marshall campus, are the best at what they do.

“She was probably the best student I have had, as far as the bookwork  goes, and one of the best welders too,” Miller said. “She once got every online objective — quizzes and tests — done for every class during the first week of classes.”

At first, Smith’s father did not like the idea of her becoming a welder.

“I loved working outside with my dad growing up, and that (welding) was the one thing he never wanted me to do,” she said. “I am great at it, and he is very proud of me.”

Smith is a graduate of Gladewater High School. After graduation, she started as a nursing major at another college before changing her career path and making the switch to TSTC.

“I picked TSTC because it is the best of the best in technical schools,” Smith said.

After finishing her associate degree, Smith wants to do welding or underwater welding as a member of the U.S. Navy.

“After being in at least four years, my plan is to go back to TSTC’s Marshall campus and get my structural and pipe welding certificate and work for Eastman Chemical Co. in Longview,” she said. 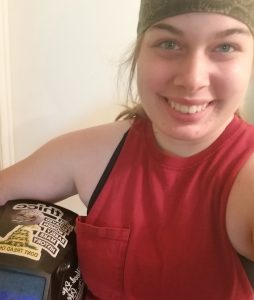