(HARLINGEN, Texas) – Luiz Ramirez of Boerne is motivated by providing for his family and seeing what he has helped create come to life.

Ramirez, a graduate of Texas State Technical College’s Harlingen campus, is a computer-aided design (CAD) technician at Matkin Hoover Engineering in Boerne. He said his job is fast-paced and involves a majority of work being done at his office, with occasional site visits led by the firm’s engineers.

“The company specializes in many aspects of civil engineering,” he said. “We touch on residential and commercial development, federal work, and we work with the U.S. Army Corps of Engineers, along with municipal, oil and gas, and transportation projects. I work on several projects at a time.”

Ramirez’s advice for pursuing a degree like his is simple: Go for it.

“The field is in need of CAD technicians and designers,” he said. “Not only is this something you can do as a career, but it is a stepping stone if you want to go into engineering.”

Ramirez grew up in Harlingen and is a graduate of Harlingen High School South.

“I went to work after graduation,” he said. “I didn’t have much of a plan right out of high school. I started working and ended up having a family. A couple of years after raising a child, I realized I had to go back to school.”

Ramirez enrolled in 2015 at TSTC and began as an engineering major before switching to Architectural Design and Engineering Graphics Technology, in which he earned an associate degree.

“I knew it was something I would enjoy and something easy to excel in,” he said.

Ramirez said Mark Rosas, an instructor in the program, was a mentor who guided him in every step of college.

“I am very happy to see how far Luiz has come, given the short time period he has been in the industry,” Rosas said. “It proves how hard he has worked, and his ability to progress and strive for his goals. Luiz had to overcome many roadblocks throughout his time here with us. However, he was still able to overcome and surpass expectations as he made his way through the program.” 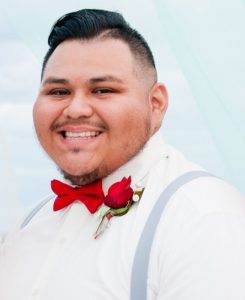