(MARSHALL, Texas) – When Ryan Holm went on what he thought was just another company tour when he was a teenager, he did not know then that he was visiting his future employer.

Holm is a student operator at Eastman Chemical Co. in Longview. He got the job while still a student at Texas State Technical College’s Marshall campus, where he is a spring candidate for graduation. He is scheduled to receive an Associate of Applied Science degree in Process Operations.

“I really enjoyed my time at TSTC,” Holm said. “The classes were engaging, the instructors would help you with anything, and overall, it’s just a nice place to be.”

“He excelled in grasping concepts and understanding their applications,” Cram said. “He has an unusual gift of absorbing information and being able to see the big picture. He isn’t just a ‘book-smart’ young man. He has the ability to put knowledge into hands-on, practical use.”

Holm said he plans to celebrate the completion of his classes with a steak dinner with his mother, finacee and future in-laws.

“What motivates me is where I have come from and where I want to be,” he said.

Holm was born in New Mexico and later moved with his family to Jefferson.

“During high school, I wasn’t really sure what I wanted to do as far as my future career was concerned,” he said. “I just knew I didn’t want anything to do with oil field work, so far as the drilling aspect of it, because I watched my father, uncle, cousin and other family members consistently laid off as the economy cycled up and down as it does.”

Two months after he graduated from high school, he and his mother lost their house, and they moved in with an uncle. Holm and his mother saved enough money for a few months to build a two-bedroom house.

“Fast forward about a year, and I had moved out and was living in Marshall, working and changing oil at a shop a few blocks away from TSTC,” he said. “After living on less than $300 a week for the last two years and less than that prior, one day I finally had enough and decided it was time to do something different. And that is when I decided to enroll in classes at TSTC.”

Holm was originally in another technical program, but after one semester  he moved into the Process Operations program.

“I remembered way back in high school in agriculture class, we took a field trip to Eastman,” Holm said. “During that field trip, we were handed a paper that had the various jobs and requirements for them. One of those jobs was for operations, and it listed TSTC as one of the schools that was partnered with Eastman, so I switched.” 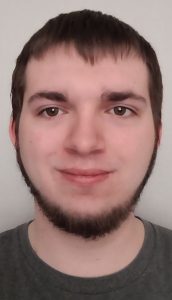