(SWEETWATER, Texas) – Students in the Automotive Technology program on the Texas State Technical College campus in Sweetwater listen when their instructors talk.

Mike Myers and Gerod Strother use their different backgrounds to teach the students what to expect on the job. Myers worked in the automotive industry for more than three decades, while Strother once served in the U.S. Air Force and U.S. Army.

“Mike knows what (auto) dealerships are looking for,” Strother said. “All of the students listen to him.”

Myers said knowing what is expected of a mechanic helps the students while they work toward a certificate or Associate of Applied Science degree.

“When I get onto a student about something they did, it is because I know that it could be a fireable offense,” he said.

Strother said Myers is quick to return to the student.

“After a couple of minutes, Mike will go back to that student, put his arm around him and explain what they did wrong,” he said.

Safety is the first lesson students learn in the program. Strother said students must pass the safety course before they are allowed into the lab.

Strother’s military career and the lessons he learned while serving the United States play a role in safety.

“I want to focus on people and make sure they are paying attention. It is always about safety for me,” he said.

Both instructors said one of the more difficult lessons is when students have to work on the vehicle’s electrical system.

“Over my 31 years, I went from basic electronics in a car to technology today, with which you can land on the moon. Some vehicles have more technology in them than the capsule that landed on the moon,” Myers said. “We go over all of it and make sure the students know what to do.”

Myers said graduates typically begin working at a dealership’s oil change station. Six to nine months later, students will go through an apprenticeship with a master technician. The final stop is the main goal, according to Myers.

“After working as an apprentice, most of our guys get their own bay at the dealership,” he said. “That is their goal. That is where the big money is for them.”

Myers said he receives phone calls and text messages from former students telling him about their journey. He also gets a call or two a month from some of them needing help.

“It amazes me that students still call or text me about something they are working on. I listen to them, and we discuss what they have and have not done,” Myers said. “Then it clicks, and they know what to do. That is what I appreciate.” 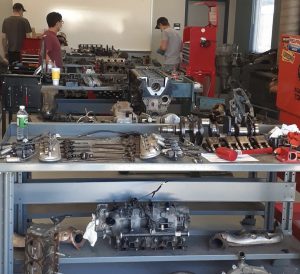