(SWEETWATER, Texas) – Billy Potts has a passion for auto racing.

The 1997 Texas State Technical College graduate is passing that passion to the next generation, but not through a lot of horsepower. Potts is president of the Bobcat Solar Racing Team composed of students at Byron Nelson High School in Trophy Club.

Each year, the team builds and then races a solar-powered car from the Texas Motor Speedway to California during the Solar Car Challenge. Potts and the team are disappointed that this year’s event was canceled.

Potts’ involvement with the racing challenge started when his son enrolled at Byron Nelson High School.

“I asked my son (Emery) to get involved. That was going to be the direction of the auto industry,” Potts said. “It was fun.”

The former team leader at that time was phasing out because his son was graduating, Potts said.

“I did not want to see this program fall apart,” he said. “We are still working and building a car, preparing for next year.”

Potts said working on a solar car offers team members something they do not get in the classroom. His son shared his father’s passion for solar racing, while some team members were merely looking for an extracurricular activity.

“Seeing those different kids working together is something special,” he said. “Some of the students come in and don’t know the right end of a screwdriver. By the time we are ready to race, they know what to do, and I just sit back and watch.”

Potts credited his career success to TSTC. He graduated from the Sweetwater campus in 1997 with a double degree in Manufacturing Engineering Technology and Computer-Aided Drafting Design.

He is currently a certified Bluebeam specialist and building information modeling coordinator for Jacobs, a company that provides professional services including consulting, technical, scientific and project delivery for the government and private sector.

Today, Potts still recommends TSTC for anyone wanting to expand their education. He said his degree led him to good jobs, including working on the Texas Motor Speedway. But over the years, Potts said he wanted to “plant his feet” somewhere.

When a job at Jacobs opened, he did just that and pursued his passion for racing. He also spends time with Emery, who is now in college, when the Bobcat Solar Racing Team gets together.

“Emery, he is my right hand now. He is helping the new team,” he said. “What I learned at TSTC is still paying off for me today. For that, I will always be thankful.” 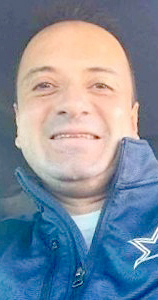