Ennis can count more than 3.6 million workers within a 60-mile radius of the city. This means there is an array of area jobs, from machining to welding, for which  people can learn skills at TSTC.

“From a logistical standpoint, we are learning that we are in the center of a lot of these hubs, these major industries and distribution centers and manufacturing centers,” said Marcus Balch, provost of TSTC’s North Texas campus. “I think that is in large part due to the major interstates coming through. There is a major railway that travels very close to the area, both north and south.”

“I think it is a resource that brings value to Ellis County,” he said about TSTC

The city recently completed a $9 million infrastructure project in its eight-block downtown that was heavily damaged by a tornado in spring 2013. Part of the work included installing a fiber-optic network operating downtown irrigation, lighting and sound systems.

“We have city-owned facilities in, and in close proximity to our downtown, and each one has become a hub,” said Ennis Mayor Angeline Juenemann. “Those hubs are connected together to create a Wi-Fi mesh network over our downtown.”

Nelson said the city recently signed a deal with Freshpet to build a manufacturing facility employing about 400 people with average wages of $60,000 a year.  Buc-ee’s recently opened on Interstate Highway 45, providing about 175 jobs.

Castanon  said that earlier spring he was working with an Ennis company specializing in manufacturing paper and printing labels for retail stores because of interest in TSTC’s Industrial Systems – Electrical Specialization program.

The city is projected to have more than 1,000 new homes constructed in the next 18 months, Nelson said.

“It is reverse migration,” Nelson said. “The Metroplex is so dense and commute times are so long. I think people are trying to find places to live so they don’t have to be in all the congestion.” 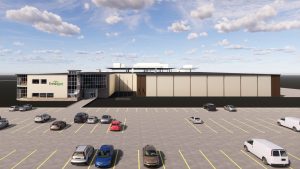