The TSTC students began the 12-week training program in March to learn the skills necessary to become electric vehicle technicians at Tesla. As a Tesla paid hourly internship, the students developed technical expertise and earned certifications through a blended approach of in-class theory, hands-on labs and self-paced learning.

All students who successfully completed the nationwide program go on to work at a Tesla Service Center in North America.

“We are excited about this group graduating,” said Adam Barber, TSTC’s interim executive director of Workforce Training in Waco.

The program’s classes are held at the Kultgen Automotive Center on the Waco campus, but due to safety precautions related to the COVID-19 pandemic, some lessons were shifted online and to the Tesla Service Center in Dallas.

Hobbs graduated from TSTC’s Waco campus in 2019 with an Associate of Applied Science degree in Solar Energy Technology and certificates in Energy Efficiency Specialist and Electrical Construction. He worked in Dallas before learning about the Tesla START program and applying. Hobbs said he believes in Tesla’s mission to “accelerate the world’s transition to sustainable energy.”

Hobbs said the electrical lessons he learned at TSTC have been critical in preparing him for success in the Tesla program. He will begin work in mid-June at a Tesla Service Center in Palo Alto, California.

“It’s very real with all the preparations to move across the country,” Hobbs said. “I plan on staying with Tesla a long time.”

McCain learned about automotive technology at a college in El Paso. He was working in government when he was laid off and looked for a new career path.

McCain said his favorite part of the Tesla START program was learning the theory of how Tesla vehicles look and operate. He will begin work in mid-June at a Tesla Service Center in Colorado Springs, Colorado.

“I am excited for the move and starting something new,” McCain said.

Sanchez graduated in 2019 from TSTC’s Abilene campus with an Associate of Applied Science degree in Welding Technology. He learned about the Tesla START program from the TSTC Alumni Network.

Sanchez said he was drawn to an interest in Tesla and its founder Elon Musk’s work.

“The (company’s) vision for the future is awesome since nobody has done this before,” he said. “It is exciting to be part of.”

Sanchez said he hopes one day to use his welding skills at SpaceX, another Musk-owned company. Meanwhile, he will begin work in late June at a Tesla Service Center in Clarkston, Michigan.

There are currently seven other Tesla START partnerships with colleges in California, Florida, New York, North Carolina, Ohio and Washington. The program launched in 2018 and has had more than 300 graduates to date.

The program’s second cohort is scheduled to begin in August, with more cohorts to follow in 2021.

For more information on Tesla START, go to tesla.com/careers/tesla-start. 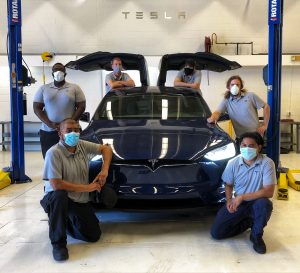