In 2016, Hendrix had the chance to build on his advanced certification when the EMS program began at the Brownwood campus.

“The closest place a paramedic program was available was more than one hour away. I had a family and work to think about,” he said. “I always told myself that if the program was offered locally, I would take it. I was happy when TSTC began offering it in Brownwood.”

Hendrix graduated this spring with an Associate of Applied Science paramedic degree.

He is no stranger to first responders and the medical field. His father recently retired after 37 years with the Arlington Fire Department, and his mother is a nurse at Cook Children’s Medical Center in Fort Worth.

“When I was a senior in high school, I started taking EMS basic courses at night. It was something I really liked,” he said. “After high school, I went to the fire academy and really liked that. I thought I could make this a career.”

Hendrix said his department supervisors gave him time off for classes. It also helped that some of the instructors worked at the Brownwood Fire Department.

“They were always good about giving me the time to complete my coursework,” he said.

Hendrix said the EMS program takes a commitment from the students, but rewards are seen at the end.

“You know you are going to pass and make it through,” he said. “The instructors make sure you are prepared to pass the National Register. That is one of the best things about the program. The instructors want you to succeed.” 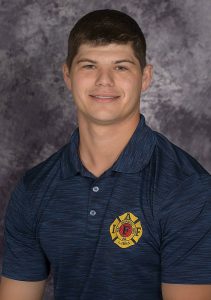