(WACO, Texas) – The plumbing and pipefitting field carries the stereotype of dirty work and smelly situations.

Not so, said Chris Porter, an instructor in Texas State Technical College’s Plumbing and Pipefitting Technology program in Waco.

“Plumbers regulate the safety of everyone, whether it’s water or sewage,” he said. “Someone can become a certified backflow installer/tester, an estimator, be able to build waste- or water- treatment plants, or even run their own business. Plumbing is for men and women alike.”

Paul Abrams, public relations director of Cincinnati-based Roto-Rooter Services Co., which has several locations throughout Texas, said the company has a challenge nationwide in filling jobs because experienced and licensed plumbers are retiring faster than new employees can join the job market. He said geography also plays a role in recruitment because of regulation differences.

“Even larger municipalities have a separate set of rules that must be followed,” Abrams said. “Some places are known as ‘restricted markets,’ meaning only a licensed plumber can do any type of plumbing work beyond sewer and drain cleaning. Even experienced apprentice plumbers aren’t permitted to turn a wrench in restricted markets unless they’re accompanied by a license holder at the job site. This makes it tough because with licensed plumbers in such short supply, we simply can’t hire enough of them at any price.”

Abrams said in unrestricted markets, apprentices can work under a license holder’s license without him or her being on a job site. In this situation, apprentices can repair common plumbing problems and leave extensive work to experienced, licensed plumbers.

Clyff Curry, business manager and financial secretary of the United Association of Journeymen and Apprentices Union 529 in Waco, said people entering the field need to have a good understanding of algebra, geometry and trigonometry and be mechanically inclined.

“We try to impress upon them the importance of being at work on time, being ready to work, being in the right frame of mind, all that good stuff,” he said.

Porter said the keys to success in the plumbing and pipefitting industry are to be a quick learner and have practical skill knowledge.

“It is a hard-working industry, but the rewards can be astronomical in the end, meaning once one has acquired his/her plumbing license from the state of Texas,” he said.

The program’s faculty are continuing to plan for the fall semester.

The program still has space for students this fall.

Texas had more than 43,100 plumbers, pipefitters and steamfitters making an annual mean wage of $50,320 as of May 2019, according to the U.S. Bureau of Labor Statistics. The Woodlands-Houston-Sugar Land area had the highest concentration of workers in Texas with more than 11,700. The Waco area had more than 400 workers.

Jobs for plumbers, pipefitters and steamfitters are projected to rise nationally to more than 568,000 by 2028, according to the U.S. Bureau of Labor Statistics. This is being attributed to retirements, the adoption of new building codes and the need to maintain and repair plumbing systems. 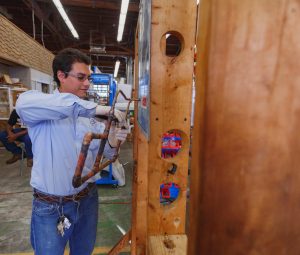