(SWEETWATER, Texas) – Climbing a wind turbine is not as easy as it looks.

First-year students in Texas State Technical College’s Wind Energy Technology program are getting in shape for such climbs. Over the first two weeks of the semester, students had to stretch and prepare their bodies for the remainder of the program.

“We have stretched a lot to begin the program,” said Hunter Anglin, of Roscoe. “I started working out some before beginning school. I am happy I did that now.”

Anglin’s stepfather works for a crane company that is used by wind turbine crews in West Texas.

“He has taken me out there a few times in the past, and I was always fascinated by what I saw,” Anglin said.

He said the best advice his stepfather gave him was to go to college.

“He told me that I need to know what I am doing. He said it would be better to get a job knowing something than going in and not knowing anything,” Anglin said.

Evan Cheyne, of Jayton, said he is also preparing himself for future climbs. Knowing that he would need to be in shape was something he learned during a TSTC highlight day at Aspermont High School last spring.

The Wind Energy Technology department allowed students from Fisher, Kent and Stonewall counties to rappel down the mobile lab. It was part of a highlight day announcing the scholarship opportunity funded by California-based BayWa r.e. Wind.

“I talked to my counselors, and they told me about the scholarship. I was able to go down the tower, and I loved it,” he said. “If I did not get the scholarship, I probably would not be able to attend school.”

Cheyne said he liked how current TSTC students presented themselves in Aspermont. He added that was another reason why he chose to attend TSTC.

“Everyone has been quite accepting of the students. The third- and fourth-semester students have been helpful with anything we need,” he said.

Both students are looking forward to the program, knowing that at some point they will be able to climb turbines.

“I have to be in good shape to do that, so working out now is important,” Cheyne said. 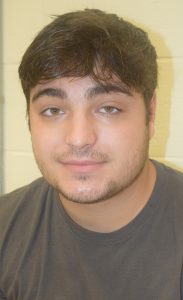