“I was working for nine or 10 months, and the company decided to do a $2 million upgrade to the electrical system,” Rowlette said. “I was working with the contractor on some of the projects, and what he was doing sparked my interest.”

Rowlette did not have a background in electrical work, but a former co-worker and current TSTC instructor led him to the college.

TSTC Industrial Systems instructor Demetri Jones told him about the program and encouraged him to broaden his  knowledge.

“You really don’t realize how much electrical systems work in our daily lives,” Rowlette said. “I was really interested in that aspect of the program.”

Rowlette, who was a B-1 Bomber crew chief in the Air Force, said serving in the military helped him pay for college.

“I was able to get some free money and go to school to learn a new trade,” he said. “I took a year or so off before starting at TSTC.”

Rowlette said his employers are pleased that he is attending TSTC.

“It is helping me here, especially with some of the employees,” he said. “Some of them may not have the tech skills to solve a problem quickly. I can ask them if something is not working to look at another possible solution.”

Rowlette said he will continue to share what he learns at TSTC with his fellow employees.

“The best way to help someone is to pass on the knowledge,” he said. 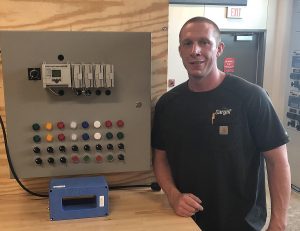