Tyler Rochelle, of Whitney, was hired by L3Harris as a computer numerical control machinist for its manufacturing department in Waco. He began in November as a part-time employee, but his work will increase to full time upon graduation this month from TSTC with an Associate of Applied Science degree in Precision Machining Technology.

“TSTC gave me all the fundamental knowledge to get started on the machines they have,” Rochelle said.

Jon Piatt, the company’s vice president and general manager, told Rochelle his skill set and desire to work will help him get where he wants to go in his career.

“You are coming in at a great time,” Piatt said at the ceremony.

Travis Beach, the company’s manufacturing manager, said Rochelle’s hiring signals a time of growth for the company as it secures new contracts. Recently the U.S. Air Force awarded the company a contract to design, produce and certify a state-of-the-art modernization solution for a fleet of 176 Air National Guard and Air Force Reserve C-130H aircraft and a U.S. Navy task order to provide planned maintenance services and in-service repairs on the U.S. Marine Corps KC-130J and T-model aircraft.

Beach said the last time TSTC students were hired for manufacturing-type jobs at the company was in 2014.

Mendias called TSTC’s relationship with the company a natural fit because of the physical proximity to each other and the shared missions of excellence, integrity and service. He said the company is a good neighbor.

“We have a track record together,” Mendias said.

“It honestly caught my eye,” he said. “This is the core of manufacturing with every product made.”

L3Harris is an international aerospace and defense technology company with 48,000 employees and customers in more than 100 countries. The company’s Waco facility specializes in aircraft modifications. 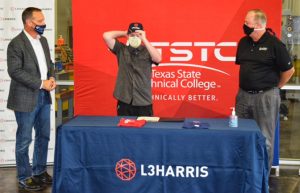