(WACO) – A job layoff in the medical field three years ago convinced DiAnna Richardson of Lorena that she needed to make a drastic change.

“I looked at what I could physically do and what I would enjoy doing,” Richardson, 48, said. “I’ve worked with computers since I can remember.”

Her new career flourished when she began work in early August as the computer technician at Valley Mills Independent School District in Bosque County. But the transformation began when she attended classes full-time at Texas State Technical College and received an Associate of Applied Science degree in Computer Maintenance Technology in late August.

Richardson said she enjoys the more than 60-mile-round-trip commute because of the country roads and rolling hills. She considers it a time to plan her day.

“I enjoy working here,” she said. “It is like a big family. From day one they were welcoming and appreciative, and I think on a smaller scale the district is more personable.”

Richardson keeps the school district’s technology functioning, from replacing computer screens to maintaining wireless connections and cyber security. She looks at what items can be recycled due to age and functionality and studies what technology could be useful to the district.

Eric Halfmann, the junior high school and high school’s assistant principal for curriculum and technology, is learning alongside Richardson. He also is in his first year at Valley Mills ISD and said he has been impressed with her quick understanding of the district’s needs.

“She gets on it and is coming and going,” Halfmann said. “She has had a big challenge recently – a hard drive crashed for a woman in our district who keeps important data and she dealt with it.”

“With her years of experience in the working world, she was very focused and serious about her coursework,” said David Macik, an instructor in the Computer Maintenance Technology program on the Waco campus. “She was an outstanding student who always made the other students better by setting a great example and providing great input for class discussions.”

Richardson said job hunting in the computer field was a scary time.

“I have been working nonstop since I was 13 years old,” she said. “Not everyone wants to hire an older individual.”

She credited Macik with helping her discover Valley Mills ISD, as well as the support the school board and community give.

“When her current position became available, I knew she would be a great fit and I was happy to recommend her for the job,” said Macik. “I know that she will be successful in her new position because not only does she have great technical skills but, also great soft skills due to her prior experience.” 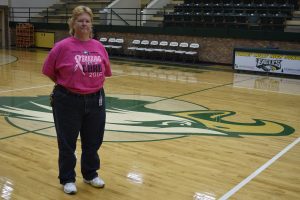