(MARSHALL) – Joshua Anderson of Waskom and Joshua Jackson of Longview have gone from the oil fields to the classroom.

Now, the two friends will walk across the stage together to receive Associate of Applied Science degrees in Computer Networking and Systems Administration from Texas State Technical College at Fall Commencement on Friday, Dec. 9.

“Joshua and Joshua have both been outstanding students with respectful attitudes, exceptional critical thinking skills and dedication to follow through until a problem is solved,” said Amy L. Hertel, an information technology studies instructor at TSTC. “They have both taken on leadership roles at TSTC and have been a great example to our incoming students. I’m looking forward to watching them enter their career field and excel.”

Anderson grew up in Marshall. After graduating from Marshall High School in 1998, he went to work in the oil fields and along the way studied emergency medical technology and receive firefighter certification.

“Then I decided I didn’t like firefighting and went back to the oil fields and met Joshua,” Anderson said. “After the oil fields, I figured I would come back to school again.”

Jackson was born in Houston and grew up in Southern California. After high school, he joined the U.S. Navy and worked with bombs and missiles. After he left the military in 2001, he was hired for oil field work in Kilgore and moved to Longview.

Anderson and Jackson worked in Texas and offshore in Louisiana. The two were laid off from their jobs in 2015.

“Being laid off was a blessing in disguise,” Jackson said. “I really wanted to go back to school and had I not been laid off I probably would not have.”

Anderson was familiar with TSTC and visited with staff members about technical programs. He told Jackson about the college, and the two registered to start classes in May 2015.

“We worked it out with our class advisor and made sure we had the same schedule to take the same classes together and study,” Anderson said.

While Anderson had been in college before, this was the first time Jackson sat in college-level classes.

“I went to school and worked full time,” Jackson said. “Being older and coming back to school is intimidating. I didn’t know how I would fare. I wasn’t sure if I could handle it, but it turned out to be a lot of fun.”

Jackson began an internship in September at Marshall’s SEVEN Networks, where he helps manage Linux and Microsoft Windows servers and handles cables.

“I’m really enjoying it,” he said. “The internship teaches me something new every day. It gives me some real-world experience.”

Anderson and Jackson were TSTC student ambassadors who gave tours and told visitors about the mission and technical programs.

Anderson and Jackson will continue their educations working on associate degrees in Cyber Security at TSTC during the spring semester.

“Everything they teach at TSTC is for local jobs,” Anderson said. “It’s to help build the community.”

For more information on TSTC, go to tstc.edu. 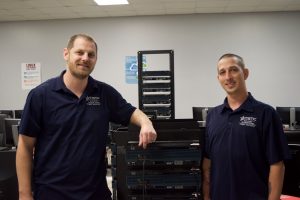