The three-man band made up of TSTC student Jose Cisneros, his brother Adrian Cisneros and family friend Ralph Lucio received a $2,500 recording contract.

“Music is in our blood,” said Adrian. “We owe this win to my grandfather and father and we hope our music is making them proud.”

“Winning is just wow! There are no words,” said Jose. “This contract will skyrocket our career and we can’t wait to se 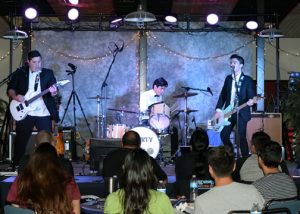 e where it takes us.”

The Texas Music Café finale, which airs on PBS, showcases the talents of Texas legends like Willie Nelson and rising stars like the four TSTC students from across the state who earned their spot in the finale thanks to YouTube likes from family, friends and the community.

In addition to the Cisneros brothers and Lucio, the other finalists included Jesse Guadarrama from Harlingen, Ruger Green from Marshall and Will Craig from Waco who competed for the grand prize.

All four musicians were judged by professionals in the music industry coming from places such as Hermes Music and iHeart Radio.

Executive Producer of Texas Music Café Chris Ermoian said the partnership between TSTC and the show started when TSTC Chancellor Mike Reeser approached him about hosting music events at all TSTC campuses.

“Mike wanted something fun for students on campus. Something to bring people together and music is the perfect component to do that,” said Ermoian.

Ermoian said that TSTC’s Talent Search contestants bring the combined best of what TSTC has to offer and he looks forward to next year’s competition and continued partnership with the college.