(WACO) – The second time was just as golden for Marcus Crespin of Victoria.

Students at TSTC in Waco won five SkillsUSA medals this year: two gold, one silver and two bronze. This year marked the most medals won since 2011 when SkillsUSA members won eight medals, according to James Matus, TSTC’s statewide SKillsUSA manager.

Crespin’s contest lasted more than five hours and involved installing an antenna along with networking a smart doorbell, home thermometer and security camera. He also took a written test.

Crespin said he felt pressure to repeat his feat from 2016 of winning the gold medal in the same event. He said he had doubts on the bus ride to Kentucky.

Juan Gongora, a classmate of Crespin’s from Victoria, won a silver medal in Information Technology Services. He finished seventh in last year’s contest. Gongora, 21, is majoring in Computer Maintenance Technology, Cloud and Data Center Management and Computer Networking and Systems Administration and is scheduled to graduate in December.

Gongora’s contest examined participants’ knowledge of 10 modules, including Linux, Windows Registry, mobile devices and viruses and malware. He prepared for the contest by studying and using material he learned in classes.

Gongora also accomplished another goal: he collected pins from every state and U.S. territory represented at the conference. He collected his last pin the day of the closing ceremony by trading for a Hawaii pin.

“You would trade Texas pins, and if you had other states’ pins you traded them too,” Gongora said.

“It was a lot of practice,” said Baus, 23, of Waco and a Cyber Security, Computer Networking and Systems Administration, Computer Maintenance Technology and Digital Forensics major from Waco. “Our team was basically the same from last year when we finished fourth. We would meet each Wednesday for two hours. Honestly, there was a lot of confidence.”

Baus said he learned more about teamwork and research while preparing and competing for the Quiz Bowl contest.

Also placing in the top three in conference categories were Joshua Hall, Zachary McLeskey and Peggy Sue Pilant, who earned a gold medal in Chapter Display, and Amy Bartlett and Charlene Knox, who received bronze in Interactive Application and Video Game Development.

TSTC in Waco sent more than 40 students who won gold medals at SkillsUSA’s statewide postsecondary contest held in the spring in Waco to this year’s national conference. 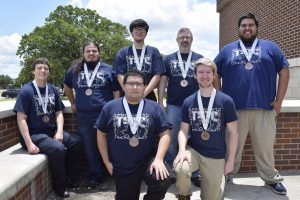 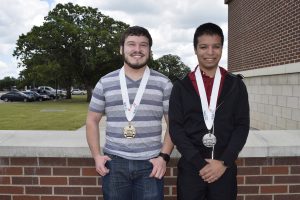