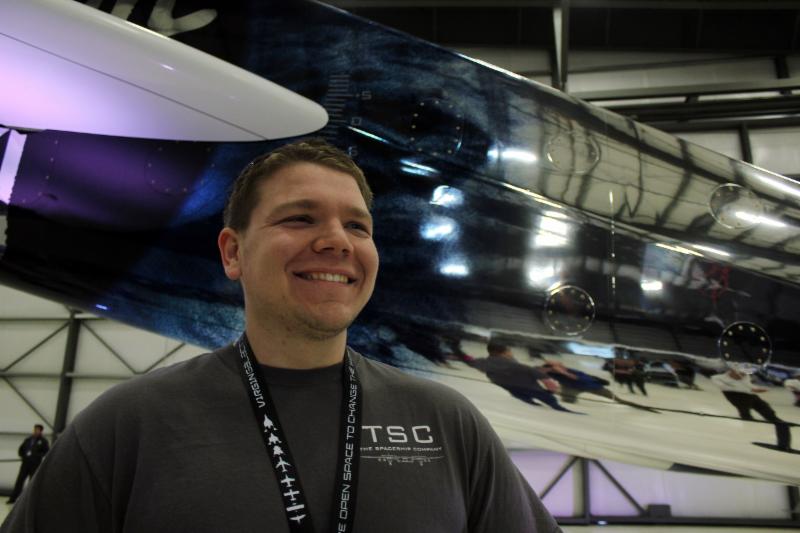 2008 TSTC Aviation Maintenance graduate Brandon Westley stands in front of SpaceShipTwo at Virgin Galactic’s unveiling event. Westley’s team at The Spaceship Company were a part of the ship’s construction.

(WACO) – Graduates of Texas State Technical College don’t just reach for the sky, sometimes they reach even higher than that. Brandon Westley, a 2008 Aviation Maintenance graduate, took on the role of Lead Production Technician at The Spaceship Company in 2013, knowing there were great things coming for the company.

The Spaceship Company is a sister corporation to Virgin Galactic, who unveiled its commercial aircraft, SpaceShipTwo, on Friday. Westley’s team at The Spaceship Company played a large role in ensuring flawless operations. The ship is designed for space tourism, and will be able to transport six passengers (and two pilots) into space.

“As a team, we go over what is on the agenda and look for any conflicts that may inhibit our work flow such as job overlaps in close quarters, or problems we may have run into the day before,” Westley said. “After the day’s agenda has been distributed I thoroughly go through my job determining what parts, tools, and possible problems may exist.”

But the job is anything from monotonous.

“A normal day can range from laying up parts, to building an oven over a section needing to be cured, to training other techs on safety and tool usage,” Westley said. “It’s ever-changing and there are lots of opportunities to learn new things here.”

Wanting to make a difference in the world, and not at a desk, Westley chose to attend TSTC for his education.

“I wanted to contribute to something greater than myself,” Westley said. “TSTC was the likely choice to learn what I needed in order to find the right path for myself, and gaining my Airframe & Powerplant license was a huge step in having the right skill set and training to succeed in the aviation industry.”

Now, Westley has about eight years of aviation experience and more than 12 years of technician experience, mostly focused on mechanical and systems areas. He previously worked for L-3 in Waco before moving to his current job in Mojave, Calif.

He chose to go into the field of aviation maintenance to fuel his passion for tinkering.

“I have always been mechanically inclined,” Westley said. “I loved to take things apart to figure out how they work. I think mostly every child has dreams of space travel and flying, and it was just a natural progression for me to combine my love of mechanics and flight into a career I would enjoy.”

It’s a good fit, since technical industries have surrounded Westley in most aspects of his life.

“I have two older brothers both with technical backgrounds,” Westley said. “I also just recently got married in October, and my wife works for The Spaceship Company in the Engineering department.”

The Spaceship Company is located in the Mojave Air & Spaceport, a leading aerospace test center for commercial operations in North America.

“I get to be at the forefront of innovation – not just with TSC here, but with all the other experimental facilities here,” Westley said. “It’s like being at an air show every day. The types of aircraft present here are better than anything you could see anywhere else.”

Westley is referring to aircraft like SpaceShipTwo, which he’s proud to have worked on.

“There is a huge sense of fulfillment knowing all these months of long hours, hard work and milestones have enabled us to build a spaceship. We build spaceships – not many people can say that,” Westley said. “We’ve built the foundation for the common man to see the stars up close and personal; It’s a remarkable feeling knowing I’ve had the chance to be a part of history.”

“I look forward to seeing what projects and opportunities join The Spaceship Company and Virgin Galactic brands after we head into test, and eventually, commercial operations of our spaceship,” Westley said. “I’d also like to go back to school at some point for an engineering degree – there is still so much to learn and design and I’d like to be a part of all of it.”

Westley’s advice for students is simple.

“Work hard, ask questions, and don’t be afraid to challenge what’s always been done in favor of what can be done,” Westley said. “The sky isn’t the limit anymore.”

TSTC offers associate degrees and certificates in Aircraft Airframe and Aircraft Powerplant technology. TSTC will begin enrolling new students for the summer and fall semesters on April 4. For more information on the aviation maintenance programs, or to apply, visit www.tstc.edu.