(WACO) – Jonathan Ramsey thought it would be a good idea to take time off after his 2012 graduation from The Colony High School in Denton County.

Thinking back, he said it was not the best decision he ever made.

“If you just want to take a break, you are going to waste your time,” Ramsey said. “You have to better yourself.”

He began classes in fall 2014 at Texas State Technical College in Waco.

“I finally came down here to be serious,” said Ramsey, 24.

Ramsey is a candidate for an Associate of Applied Science degree in Robotics Technology at TSTC’s Summer 2017 Commencement on Aug. 18 in Waco.

“It’s a long time coming and it means moving on to bigger and better things,” he said.

Ramsey works with the program’s robots several times a week. He has come to enjoy the motor controls and troubleshooting aspects of robotics technology.

“Jonathan’s work ethic is one of the most impressive things I’ve observed since I’ve been his instructor,” said Brandon McMahan, a TSTC Robotics Technology instructor. “We know he works late nights as a server and bartender at a restaurant, but he never misses class and never uses that as an excuse. The level of his work has really improved because he comes to school with a great attitude and focuses on improving his techniques. We often use his work as an example when we show the lab to potential employers.”

While at TSTC, Ramsey discovered Cameron Park along the Brazos River. He said he likes exploring the trails and sitting at his favorite spot in the park overlooking the river while reading the Bible and drinking coffee.

Ramsey said The Colony was a good family-oriented place in which to grow up. He, like others in his generation, grew up with technology.

“When I was eight, I had my own computer,” he said. “I took it apart and fixed it so many times.”

He began playing guitar in 2008 after his grandmother gave him one as a gift.

“When I was growing up, I went to a small private school for a bit,” Ramsey said. “I sang in the chorus and learned how to read music. When I went to middle school, I learned how to play the tuba. Music is my stress relief.”

He got involved in Tiger, Cub and Boy Scouts and progressed to be a senior patrol leader and Eagle Scout. He was also a crew leader at Philmont Scout Ranch in New Mexico.

Skills he learned in Boy Scouts have helped him in his studies at TSTC.

“When it comes to leadership, I can work with a group and do that,” Ramsey said. “The most important things are time management and meeting deadlines.”

After graduation, he wants to work in the Dallas-Fort Worth area.

TSTC’s Summer 2017 Commencement will include graduates from the North Texas, Waco and Williamson County campuses. The ceremony will be at 6:30 p.m. on Friday, Aug. 18 at the Waco Convention Center at 100 Washington Ave. 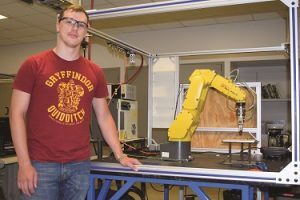